Australian rising star Jack Miller races into the points during Moto3 round at Catalunya. 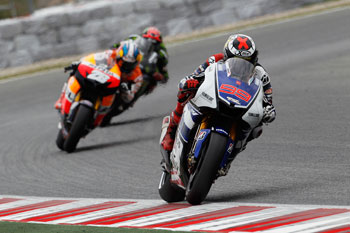 Yamaha's Jorge Lorenzo won ahead of Dani Pedrosa and Andrea Dovizioso at Catalunya.

Casey Stoner finished off the podium for the first time in over 12 months as MotoGP World Championship leader Jorge Lorenzo raced to victory at Catalunya in Spain on Sunday.

The World Champion maintains second place in the championship standings, now 20 points behind Lorenzo, but has assured fans that he’ll be back to his best in upcoming rounds.

“I’m a little disappointed, we gave it everything at the end but we just didn’t have the pace, especially in the beginning with the hard tyre,” he reflected. “It seemed that only Dani could really make that tyre work today and he made it work better than us.

“With the performance we had during the weekend we expected to be a little stronger throughout the race, we knew the beginning was going to be tough but we believed that towards the end we would be able to run a higher pace. We weren’t sure if the softer tyre was going to be a problem for us in the race so we took the safer option today.

“We thought we had a better bike and better pace, but it didn’t come together. Still we came home with some points and we have the test here tomorrow to work on the chatter issues so I’m sure we’ll be back fighting at the top again soon.”

Lorenzo won his third grand prix of the season for Yamaha after making a late pass on Stoner’s teammate Dani Pedrosa, while Dovizioso claimed third.

The Moto3 race was a positive one for young Aussie Jack Miller, taking home one championship point in 15th, while Arthur Sissis was 22nd.

Moto3 in Spain was won by Maverick Vinales ahead of title rival Sandro Cortese, with Miguel Oliveira completing the podium.