Australian Supercross to host round at Phillip Island MotoGP 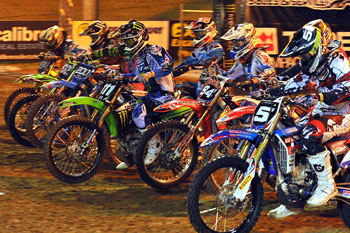 Australian Supercross could be a surprise addition to the MotoGP schedule. Image: Sport The Library.

The Australian Supercross Championship is poised to make a shock appearance during the AirAsia Australian Motorcycle Grand Prix at Phillip Island in October.

Motorcycling Australia yesterday released a calendar confirming the MotoGP event as round two of the supercross series, before promptly recalling the announcement after a suspected communication misunderstanding.

Now, it’s tipped that the Australian Grand Prix Corporation will announce the sideshow within the week.

“The MotoGP round, which we are working to finalise in the coming days, will be enormous for the sport,” IEG managing director Yarrive Konsky told MotoOnline.com.au, which is CycleOnline’s off-road partner website.

“We are engaging a new audience and reaching national and international corporate sectors that previously weren’t possible. It’s also a great way to profile our Australian champions. Cross brand pollination is key to growing the sport.”

While the Australian Superbike category will compete on the GP weekend, it will mark a non-championship event for the ASBK regulars, run by the GP Corporation.