Pedrosa wins at Motegi as Stoner seals fifth on return 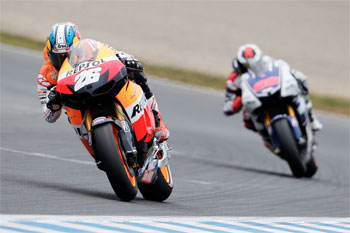 In an enthralling MotoGP™ race at the AirAsia Grand Prix of Japan in Motegi it was Repsol Honda Team’s Dani Pedrosa who closed the gap in the title fight further with a strong win ahead of Jorge Lorenzo and Álvaro Bautista.

It was Yamaha Factory Racing’s Lorenzo who got away best, yet had to be bold in turn one to hold off Pedrosa. Power Electronics Aspar’s Randy de Puniet crashed on the first lap but re-joined, while Yamaha’s Ben Spies crashed out going into lap two, citing afterwards that he suffered a brake failure.

It was a crash-laden early stage as Avintia Blusens’ Yonny Hernandez also dropped his bike in the gravel, suffering a left top-shoulder-joint dislocation and a contusion to the left foot.

With 17 laps remaining Lorenzo and Pedrosa had pulled out a lead at the front with Crutchlow running a lonely third. Stoner was desperately looking for a way past Bautista, yet the Spaniard was battling hard to keep the Australian at bay.

Meanwhile Ducati Team’s Valentino Rossi was in eighth struggling to keep up with Dovizioso’s pace in front. It was then two laps later that Dovizioso forced his way past Bradl, who was suffering with arm-pump, to hunt down Stoner in fifth.

With 13 laps remaining Pedrosa got better drive out of turn four and made his way past Lorenzo on the straight into the lead, looking instantly quicker on the Honda.

As Lorenzo tried to keep up, it was Bautista who was slowly closing in on Crutchlow, who did well to save a near fall. Five laps on, De Puniet was forced to retire, as was Hernandez’s teammate Iván Silva. The same lap also saw Dovizioso make his way past Stoner into fifth.

With six laps left Pedrosa had built up a commanding lead over Lorenzo, whilst as a lap later Bautista muscled his way past Crutchlow into the final podium spot, and the pair provided a thrilling battle on track.

The Brit fought almost straight back with a move up the inside, yet Bautista retook him in the next turn where the two touched. And it was heartbreak for Crutchlow on the last lap as he pulled over having run out of fuel, whilst looking to fight to the line.

It was ultimately Pedrosa who kept his nerve to take the chequered flag, with Lorenzo and Bautista completing the rostrum, making it the second ever premier-class podium for the San Carlo rider.

It was Team CatalunyaCaixa Repsol’s Marc Márquez who staged a stunning comeback to win in an eventful and thrilling Moto2™ race at Motegi in front of Pol Espargaró and Esteve Rabat. Queenslander Anthony West claimed an inspiring 12th.

It was Red Bull KTM Ajo’s Danny Kent who took his maiden victory in an extremely dramatic Moto3™ race ahead of Maverick Viñales and Alessandro Tonucci. South Australian Arthur Sissis was 11th, with countryman Jack Miller crossing the line 19th.