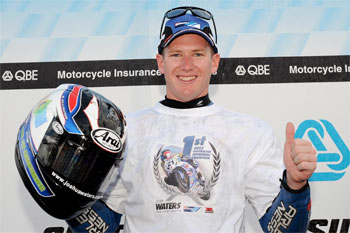 Team Suzuki’s dual Australian Superbike Champion Josh Waters is on the verge of securing a fulltime World Superbike seat in 2013, confirmed to be testing for FIXI Crescent Suzuki this week.

Crescent initially had come to a full and final agreement with Frenchman Sylvain Guintoli for him to join the team for 2013 on a one-year contract, alongside returning Brit Leon Camier.

Despite this commitment, Crescent now understands that Guintoli has since received an alternative offer from a rival manufacturer. He has told Crescent that he wants to consider this offer in detail and that he is now unable to commit to this week’s Aragon test or to the agreement made with Crescent.

Despite the obvious turmoil and potential damages created by these actions, Crescent has taken the decision to move forward and to simply release Guintoli from any obligations for the forthcoming season.

Following these developments, FIXI Crescent Suzuki and the newly re-signed Camier will now be joined at this week’s World Superbike test at Aragon in Spain by Waters.

The 25-year-old Australian from Mildura in the state of Victoria wrapped up his second Australian Superbike Championship this season – a title he’d also won in 2009 – and will make his debut for the FIXI Crescent Suzuki team in Spain during the three–day test.

“I am extremely disappointed and surprised by Sylvain’s lack of integrity and total lack of respect for the mutual commitments made,” team owner Paul Denning said. “He is the last rider I would have expected to behave in such a way, especially as we have had a close professional and personal relationship previously.

“Our team has always tried to stand by the fundamental principle that you stick to what you’ve agreed to, and in the long run it’s always been the best policy. Sylvain clearly doesn’t feel the same way and is prepared to ignore a handshake, a gentleman’s agreement and indeed a written contract – and that’s a great shame.

“Our energies are now focused on looking forward to the positive opportunities we have as a team in 2013. We are delighted that Josh has been able to join us on such short notice to help us with our plans for next season.

“He’s had a very strong season with the Suzuki Australian Superbike team and he performed brilliantly for our partners, Yoshimura, in the Suzuka 8-Hour race. I am sure he will settle in with the crew quickly and we’re all looking forward to seeing how he goes!”

FIXI Crescent Suzuki will assess its rider options over the next few days, and will naturally be considering Waters as a candidate following the test, which will allow both team and rider to have a closer understanding of the mutual potential.