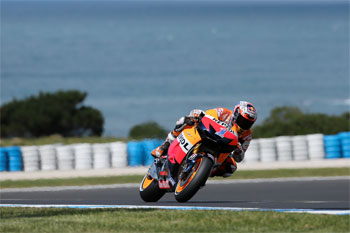 Casey Stoner made it six straight MotoGP wins at Phillip Island on Sunday.

Casey Stoner could not have planned a better farewell as he notched up a record sixth consecutive victory at the 2012 AirAsia Australian Motorcycle Grand Prix in front of a record crowd of an estimated 53,100 fans.

Under glorious blue skies, Stoner was quick to capitalise on an early crash by fellow Honda teammate Dani Pedrosa who was leading the race on lap two.

The Spaniard returned his Honda to the pits and retired from the race and at the same time he handed the 2012 MotoGP World Championship to fellow countryman Jorge Lorenzo.

Estimated crowds at the Island reached a record three day total of 122,470, more than 28 percent up on last year’s total attendance of 95,100.

Stoner held his lead from lap two and never looked challenged, his nearest rival was Lorenzo who finished the race 9.223 seconds behind him. Cal Crutchlow rounded out the top three, finishing 14.570 seconds behind Stoner.

“It was very important for me to win a race before the end of the season and I’m really happy to do it here, at home, in front of the huge crowd,” Stoner said. “My biggest worry was to be fit again and competitive for this race, but we managed it and we had something over everyone else and this was the perfect way to say goodbye here.

“I was pretty nervous going into the race, but the conditions were fantastic for a Phillip Island race. When I knew I only had a few laps left and a big lead, I was watching the crowd and it was fantastic to see everyone cheering me on, it made me very proud to be Australian.

“My biggest congratulations to Jorge. He’s ridden an almost perfect season finishing first or second when possible and I’m just disappointed not to be in the championship fight, but I made my own mistakes and this is how things go.

“My condolences to Dani, ­I saw him crash out in front of me­ but he had to push today and go out and win the race to keep his championship hopes alive. It was a small mistake, easy to do in this corner and I feel very sorry for him. Thanks to everyone for coming down and showing their support.” 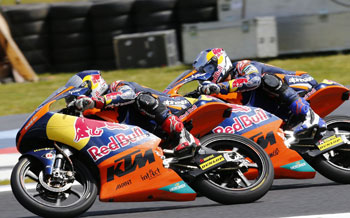 South Australian Arthur Sissis was a spectacular third in the Moto3 round at Phillip Island.

The Aussie dominance of the Phillip Island Circuit started early on day three with 17-year-old Arthur Sissis claiming the first podium of his career, with third place in the Moto3 race in the race won by world champion Sandro Cortese.

“I’m really, really happy,” Sissis said. “All the crowd and everybody supported me so much this weekend. I was really nervous going into the race because I wanted to do good and I knew I had to battle hard for third place. I was really happy, I was screaming in my helmet!”

Gold Coast rider Anthony West followed Sissis with a superb second place in Moto2, his second podium in as many weeks.

“It’s amazing – it’s crazy how things work,” West said. “I spent the last ten years fighting for this position and then it just comes twice in a row. It’s crazy. And to think I started the season without a ride and last minute turn up in Qatar and start riding for this team.

“So I really have to thank them a lot for giving me the chance to continue and for me this is a much better result that last weekend. Last weekend was just a big confidence booster for me. And that’s what I needed.

“I’ve been so sort of down and that’s what I needed to pump myself back up and this is the real result that I wanted in the dry. And everyone keeps telling me the wet man and the rain’s coming and it’s good, but I’m happy to be in the dry and have this result. And I want to congratulate Marquez on his title. It’s great.”

Spanish rider Marc Márquez secured the Moto2 World Championship with a third place finish in the penultimate event of the year. Márquez becomes the fifth Spanish rider ever to win a world title in the intermediate-class.

The stellar performance from both Aussies ensures that despite King Casey’s retirement at the end of 2012, the future of Australian MotoGP is still in very good hands.

“Casey once again delivered a world class display, taking line honours for a sixth time in front of a record and adoring home crowd,” he said.

“He has proved to the world yet again that he is a true champion of this sport by winning at Phillip Island today.”

“With Aussies on the podium in each class today, we welcome a new era of motorcycle racing.”