Allerton and Lockart the round winners during action-packed finale in Sydney. 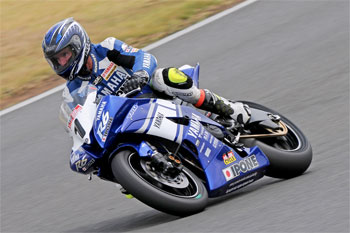 Yamaha Racing with Ipone spearhead Kevin Curtain rode through the pain of a broken sternum to secure both the Australian FX-Superbike Championship and the FX-600 championship at Sydney Motorsport Park on Sunday.

In a nasty fall at the previous round in Winton, Curtain put his championship aspirations in serious jeopardy when he fell on the water-laden circuit, receiving a heavy hit to the chest. With only four weeks to get back into shape, Curtain was unable to do any preparation for the final round at Eastern Creek and showed up hoping his batted body could last out the weekend.

The focus wasn’t on the round, but rather securing another championship and as usual, Curtain was all business and able to return both championships to the Yamaha Racing with Ipone team.

In the premier Australian FX-Superbike Championship, Curtain posted 2-3 results in the first two races, and with some issues to his nearest rivals, he was able to claim the championship win with one race to spare.

It was a heroic performance from a legend of Australian road racing and the weekend’s result will only elevate his status.

The round was won by Hepburn Motorsports BMW rider Glenn Allerton in convincing fashion, winning all three races for the overall ahead of Aprilia Racing debutant Broc Parkes and Kawasaki privateer Dustin Goldsmith.

The man Curtain pipped in the Australian FX Superbike Championship was none other than teammate, Rick Olson. Olson finished just four points behind Curtain in the championship standings and his DNF in race one at the final round at Eastern Creek proved costly.

Olson was in a tight battle with Allerton when he went down. He was unable to remount and finish the race and effectively that was the moment the championship was handed to Curtain.

Curtain’s duties weren’t over as the FX-600 championship carrot was still dangling in front of him and again all it took was two solid races to get it done and notch another remarkable achievement in his career.

Curtain won the opening two races to stretch his lead beyond 50 points and then elected to sit out the final race.

And just to cap off a huge weekend for Curtain, he was able to secure the FX Nationals 1000cc championship ran in conjunction with the Australian FX-Superbike Championship rounds. That makes three national championships for Curtain in season 2012.

“My first ride back on the bike was yesterday and there was still some discomfort so I really had to manage my body and racing over the weekend,” Curtain said. “Thankfully I had enough strength, combined with some luck going my way, and I was able to win both championships and make it another successful year for Yamaha and myself.

“I’m really proud of these championships as they have come the hard way. Myself and the team were able to overcome a few challenges during the year and we managed to finish on top of both championships. A huge thank you to the Yamaha Racing with Ipone team, our sponsors as well as my family for being so supportive of my racing and I also want to congratulate Rick on his racing this year.

“It’s amazing that I still get the same satisfaction out of racing and winning as I did when I started my career.”

The FX-600 round was taken out by Kawasaki rider Michael Lockart ahead of Curtain and Yamaha teammate Mike Jones.

Yamaha Racing with Yamalube’s Cru Halliday secured Yamaha its third major championship victory over the weekend when he raced to second place behind Allerton in the Formula Oz class.