Take an all-access look at your sport every Wednesday on CycleOnline.

Do you ever consider where your sport will be in five years time? Wonder what the future holds? Or perhaps think back to the ‘good old days’? Since re-launching CycleOnline this year I’ve done all of the above on many late nights, considering the task ahead once the season officially starts.

While you would have seen a few updates roll out on the site this week, much of the attention has been on the back-end in a bid to get it all on point for Phillip Island’s World Superbike and Australian Superbike (kind of) openers at the end of February.

Glenn Allerton was on track during practice for the Island Classic last Thursday alongside Next Gen Motorsports BMW (I’m still getting used to that!) teammate Linden Magee, testing Pirellis and ultimately preparing for his WSBK wildcard.

Team Honda Racing has no doubt been working tirelessly at their Melbourne base preparing the CBR1000RR and CBR600RR for Jamie Stauffer and Josh Hook to campaign in their international debuts, with their first test right around the corner (they have plenty of work to do adapting to the Pirelli spec tyres they’ll use one-off at the Island as well).

Team Suzuki is yet to announce its team, but as we mentioned recently, all signs point toward Wayne Maxwell since he rode a Suzuki at the Troy Bayliss Classic in those familiar grey Arlen Ness leathers and just last week ‘liked’ Team Suzuki Australia on Facebook. We’ll take any hints we can get!

Brodie Waters confirmed this week that he doesn’t have a seat right now and will likely sit out the season unless he can get something competitive to ride. On top of that he said that he’ll most likely hang up his helmet altogether if he has to sit a full year out because it’s simply too tough to rebound after 12 months off the bike if you want to be world class. That’s a real shame to hear and his brother Nicholas is in the same boat.

At all standalone events this year we will see the Superbike class run separately to Prostock, but my concern is that the grid is going to be too thin – especially at select rounds. We’ll wait and see, but fingers crossed we see a heap of fresh faces emerge in 2013, even if they are your traditional state level racers that might not usually race in the nationals. 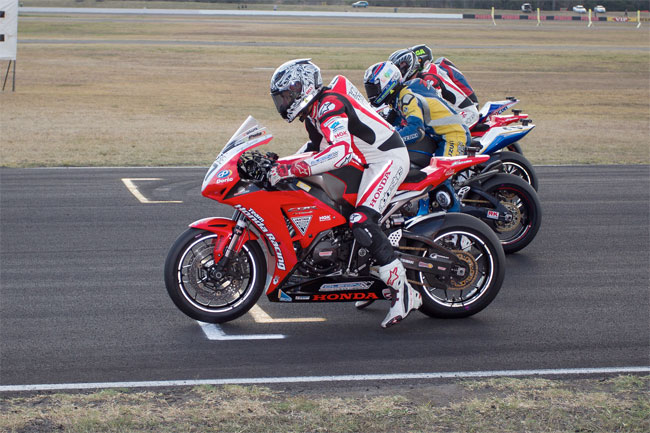 How many bikes will we see in ASBK 2013? Image: Andrew Gosling/TBG Sport.

Confirmed we have Stauffer and Hook at Team Honda Racing, Allerton and Magee at Next Gen Motorsports BMW, Beau Beaton at Racers Edge Performance Suzuki and Ben Henry on his Cube Racing Suzuki. Apart from that there might just be one factory Suzuki with Maxwell in the seat if speculations is to be believed, most likely alongside Robbie Bugden in his satellite role with support from Suzuki NZ.

The word is that InsureMyRide The Ultimate Rider winner Glenn Scott will campaign a Honda in superbike, plus a couple more BMW privateers are looking to take part according to the promoter. That’s around 10 riders, but heck, at least 16 riders should be minimum – 20-24 even better.

I’m still not sold on the rule set that is in place for the ASBK series. There are many different arguments regarding this, but I’m a firm believer that the simplified aspect of Formula Xtreme (basically slightly up-spec Superstock bikes) is a strong point of that rival (yes, rival) series. For the majority, the more straightforward regulations are attractive and the racing is just as spectacular (if not even more so).

At the end of last year I rode Team Honda Racing’s ASBK contender, Yamaha Racing Team’s FX-Superbike and Formula Oz bikes, plus Hepburn Motorsports BMW’s ASBK and FX bikes. Were the ASBK bikes any more exciting to ride than Kev Curtain’s R1? Not really – they’re all well refined bikes that are tuned by the best in the country. My feeling is that the ASBK bikes have modifications that aren’t necessary.

Of course, Team Suzuki (Phil Tainton Racing) and Honda (Motologic) thrive on the challenge of technically evolving their race bikes, as does Yamaha obviously since they introduced the Formula Oz bike in 2012. However, the reality is that no Superbikes in Australia are true Superbikes when you compare them to what we see in WSBK, Britain or even America. No doubt the team owners are very knowledgeable and have the sport’s best interest in mind, working hard to make steps forward – especially Paul Free from a marketing perspective. Sometimes though it’s like we’re not looking at the big picture.

Maybe when WSBK makes their regulations more standardised in 2014 thanks to Carmelo Ezpeleta and Dorna we will see MA also scale back the local specification, but we’ll wait and see to what extent. Unlike 10 years ago when the production bikes needed to be highly modified to perform well on race tracks, the latest and greatest are more than capable with limited revisions to turn them into ultra quick race bikes with good horsepower and great handling potential.

Last year in the ASBK there were 19 riders that scored points during at least round in the premier Superbike class. In FX-Superbike there were almost double with 37 riders that scored at least one point during the season. Hopefully the ASBK’s return to New South Wales and Sydney Motorsport Park will boost numbers across the board, although that’s yet to be seen.

At the moment it seems Motorcycling Australia is being reactive, rather than proactive when setting the rules. Truth is, what we have now isn’t working otherwise grids would be a lot deeper. And yes, I have spoken to countless industry experts about it all and they have reasonable opinions, but this is my opinion. You have to be ahead of the curve, not chasing your tail, otherwise the ASBK series could be in severe trouble if the 2013 season doesn’t show legit signs of growth.

In saying that, International Entertainment Group (IEG) has to be commended for their efforts in boosting incentives and so do vital sponsors such as Link International (Pirelli) and QBE for stepping up to the plate with prize pools to try and help the sport. And by the way, the ASBK uses Fluid PR for their public relations and in my eyes that company is the best in the business… more on that in a moment.

The incentive to race for this year is basically better than ever, but I’m certain we would see more riders come out of the woodwork to take advantage of these offers if they at least believed they could build a somewhat competitive bike with limited resources, time and development.

The best riders and best teams (usually at the factory teams obviously) will still win, but it seems the mindset for many privateers is completely different when mods are reduced like in FX. It’s easier and has to be cheaper, but I haven’t built one so I don’t have my own proof of that. The pricing differs depending who you ask on the ASBK or FX side of the fence. 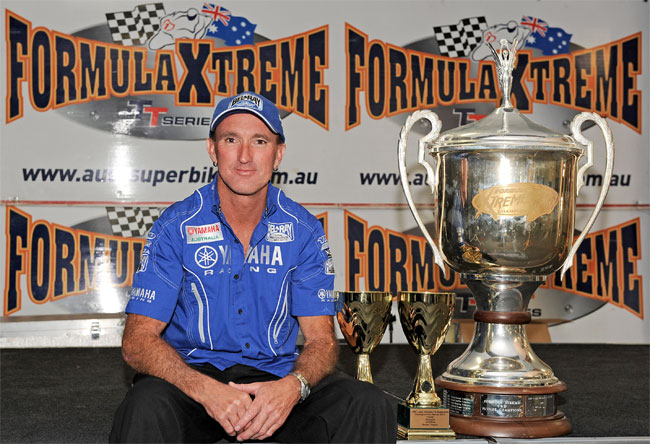 Kev Curtain is the ‘King of Xtreme’, but we’d like to see more communication from the race organisers. Image: Keith Muir.

Now, back to PR as I mentioned above. Plenty of FX announcements have been made (spotted them on the series website), but I’ve had zero communication from the series organisers regarding the prizes, structure, etc. Seriously, if I am not getting these press releases delivered and I rarely see them anywhere other than the FX website, then who is getting them? Between my roles at AMCN and Auto Action, plus the limited time I spend on this very website, it’s not that difficult to ensure I see the news – and yes, they have my email addresses.

I highly respect Terry O’Neill for the cost effective series that he and the Australian Road and Track Rider Promotions company have put in place, including the impressive TV coverage they have in place and unique series prizes. But apart from the lack of distributed announcements, not once have I seen a race report sent either to my website email or AMCN email in the past few years. Lucky we have Yamaha and select privateers sharing the info following any given weekend.

There is the argument that the media should be attending all races, as the likes of AMCN do, but the majority just aren’t able to (date clashes and budgets are the reasons for most). In my case, between the ASBK, FX, motocross, supercross, off-road, and more, we simply can’t be everywhere and don’t have the backing to personally send somebody to every single event. I have the contacts to piece stories together, but the general press definitely don’t and won’t.

In motocross, your average public relations company distributes to hundreds of national, local and international press outlets, both within the sport and outside of it. I own a PR company and previously handled all the MX Nationals PR, so I understand just how hard it is to gain coverage when it comes to domestic two-wheel sports. But that doesn’t mean promoters shouldn’t be trying. This is an area where IEG excels whether it be ASBK, supercross or arenacross.

Anyway, there are so many things that need to be looked at, refined and calculated for the sport to be a success. Excuses fly left, right and centre as to why it’s not as popular as it once was, but I think IEG experienced just how much easier it is to promote a sport with a following when they took over supercross.

Personally, I experience this on a daily basis with my dirt bike website, mostly because the sport has solid foundations in place to stand upon (and that hasn’t always been the case) and there are true fans following their favourites (and we as the press do all we can to help create those identities). It’s not perfect by any means, but it is promising.

And what’s the point in writing all of this? Probably not much, but it’s nice to have a way to voice my opinions and maybe someone will read them and take them into account from an outsider’s perspective. Unfortunately for road racing, it looks like we’re all going to have to start from the ground up. Challenge accepted…