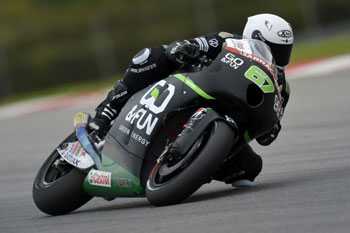 Despite rounding out the back of the field on debut at the demanding Sepang circuit, Staring is satisfied with his progress across the three days of testing.

“There is still a lot to learn, but I think that we are on the right track with the help of the guys on the team,” Staring said. “They never put me in any difficulty and always have me trying out technical solutions, without distracting me too much from just adapting to this new style of riding.

“Sepang is definitely not the best circuit at which to make your debut, as it is so long and it is hard to learn all the lines. In any case, I am motivated.

“Today I improved my time from yesterday and I am convinced that very soon I can be competitive.”

MotoGP testing will resume at Sepang on 26-28 February, marking Staring’s second outing with the Italian team.