'Lukey Luke' is about to give KTM's Duke range a workout for which it wasn't strictly designed, but he's confident it'll take whatever he can throw at it. 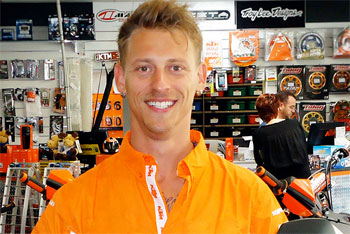 Famous Melbourne stunt entertainer Luke Follachio, aka ‘Lukey Luke’ is about to give KTM’s Duke range a workout for which it wasn’t strictly designed, but he’s confident it’ll take whatever he can throw at it.

One of, if not the premier motorcycle stunt acts in Australia, Lukey Luke today begins a new arrangement with KTM Australia which will see him performing on KTM’s Duke and Super Duke models in 2013.

The 29-year-old is a regular feature of Australia’s high-profile motorcycle events, performing at road races, motorcycle expos, events and festivals around the country.

Lukey Luke will keep two of KTM’s attention-grabbing naked bikes in his stable, a 690 for the tighter confines of expo or festival-type applications, and the raw power of the 990 Super Duke R for race track performances.

“Having Lukey Luke on board our 990 Super Duke R, which is currently about the hottest street-legal naked bike around, is an exciting opportunity for us,” said KTM’s national marketing and communications manager Greg Chambers.

“He’s a hard-core rider and a guy who likes to push his bikes to edge – something all the riders we support have in common – and we’ve got some very cool future projects planned that should excite all KTM fans.”

Like all the official KTM riders Lukey Luke will have the support of Motorex Oils, KTM Powerparts and KTM Powerwear.

“I’m so excited to be with KTM,” said Lukey Luke. “KTM is an exciting brand in the way they market and the things they do with their athletes. I liked that and wanted to be a part of that, so it was an opportunity to be involved in something fun and uplifting that I couldn’t say no to.

Lukey Luke and his KTMs will perform some 35 shows up to 25 minutes in length this year, taking in all ASBK rounds, the Australian MotoGP, Motorcycle Expos in Sydney and Brisbane, as well as toy runs, charity events and festivals around the country.