2013 MotoGP season gets set to open under lights at Qatar

One of the most eagerly awaited MotoGP Championships in recent years will open under lights in Qatar this week. 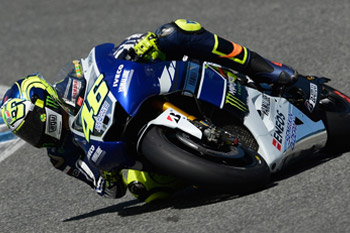 One of the most eagerly awaited MotoGP Championships in recent years will open under lights at this week’s Commercial Bank Grand Prix of Qatar.

The pre-season focus has fixed firmly on the battle between Yamaha Factory Racing and Repsol Honda which field new yet familiar lineups for 2013.

Reigning World Champion Jorge Lorenzo will feel the heat not only from long-time rival Dani Pedrosa, but also from the returning Valentino Rossi who has shown exceptional testing pace on the M1.

Add Moto2 graduate Marc Márquez into the mix as Pedrosa’s stablemate and the scene is set for an epic four-way factory fight.

The Satellite Yamaha and Honda teams are looking strong, too, and the testing performance of Monster Energy Tech 3 Yamaha’s Cal Crutchlow cannot be ignored.

Crutchlow finished the final Jerez test on top of the timesheets, while new teammate Bradley Smith kept a close watching brief, impressing many.

The LCR Honda MotoGP machine of 2012 Rookie of the Year Stefan Bradl and the GO&FUN Gresini RC213V of Álvaro Bautista have also shown promise and are sure to be contenders from the season outset.

A management re-shuffle at Ducati made for a tough opening test but factory riders Nicky Hayden and newcomer Andrea Dovizioso have made inroads since and are eyeing further improvements on the new Desmosedici as the season progresses.

Their satellite riders, Ignite Pramac’s Ben Spies and Energy T.I.’s Andrea Iannone, both on factory bikes, could prove a threat, as the Italian has proven capable of some strong performances, whilst Spies is yet to show his full potential due to a recovering shoulder injury.

The second year of CRT class competition should see the performance gap closing and a greater mix of riders in contention.

The Australian fans’ focus will be on Bryan Staring who was rewarded for his World Superstock 1000 efforts with a GO&FUN Gresini seat.

There is no questioning the work ethic and ambition of Staring, launched his international career on the back of his Australian Superbike Championship win in 2010.

The Power Electronics Aspar duo of Aleix Espargaró and Randy de Puniet had seemed like the certain CRT favourites, but with impressive showings from the likes of Avintia Blusens’ Héctor Barberá in testing, it will make for an unpredictable spectacle.

The class will be strengthened by a softer-spec rear tyre option solely available to CRT riders.

A new qualifying format will add to the action this year.

The timesheets of the three practice sessions will be combined, from which the ten quickest riders will immediately pass through to Q2.

Prior to that, the rest of the field will contest Q1 in order to fill grid positions 13 and downwards; the best two riders in Q1 will be awarded an entrance to Q2, providing a top-12 showdown for the first pole position of the year.

The ever-competitive Moto2 class promises more of the same action as its fourth season gets underway.

Pre-season testing puts Pol Espargaró at the front of everyone’s mind as favourite, though a raft of new and old contenders that once again promise to be at the sharp end and challenge for a win in one of the tightest fought championships in the world.

Compatriot Julián Simón on his Italtrans Racing Team Kalex, as well as Mapfre Aspar Team Moto2’s Nico Terol on his competitive 2013 Suter already look like contenders, whilst Marc VDS Racing Team’s Scott Redding and Italtrans’ Takaaki Nakagami will certainly be in the mix.

Aussie hope Ant West will look to use his extensive experience to slice through the field at the season opener.

West is renowned for his ability to pick off place after place through the race and has a solid top 10 chance in Qatar.

The hard-chargers in Moto3 will descend on Qatar for only the second time since the class’ introduction last year, and will arrive with yet further promise and high expectations.

With some of the closest racing witnessed in 2012, and further improvements to the bikes across the class during pre-season, the 2013 season opener under the Losail floodlights is eagerly awaited.

Viñales will start in Qatar with a slight handicap as he lost a fingertip during the final test, yet he will still be viewed as one of the season favourites.

Australian teenagers Jack Miller and Arthur Sissis will be strong and have the experience and racecraft to factor at the front in the flat-out class.