A mix of nerves and excitement await Staring’s MotoGP debut

Australia's only MotoGP entry ready for first premier class race under the lights of Losail. 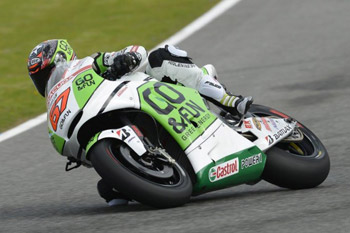 Staring will be one to watch in the CRT class as he learns the ropes in MotoGP.

With his MotoGP debut just days away, Australian rider Bryan Staring has admitted he is feeling both nervous and excited about the challenge that lays ahead.

The GO&FUN Honda Gresini pilot will be the lone Australian entry in the premier class and heads to the Qatar circuit sight unseen.

Staring is not underestimating the task after a promising start to his pre-season testing schedule was hampered by rain in the latter stages.

The #67 CRT machine is certain to be one of the big improvers as the likeable Australian learns more about its performance and handling each session.

“I am nervous and excited about making my debut in MotoGP,” said Staring.

“After an encouraging test at Jerez I am highly motivated and confident we can do well. I don’t know Losail but I have watched all the races there on television and I’m curious to experience it myself.

“Obviously racing at night will be completely new to me too but that just makes me even more excited about making my debut in MotoGP. Hopefully I can have a good race and start the season in the right way.”

He feels his pre-season preparation with the team has him in good stead for what lays ahead.

“I have worked hard with the team throughout the winter and gradually I am getting used to the bike, which is very different to anything I have ridden before,” he continued.

“I have gradually adapted my riding style to cope with the power of the FTR-Honda and I am ready for this new experience now.”

Staring’s first official outing on the 5.38km circuit will be from 7.55pm tomorrow evening (Local +3 GMT) for the first Free Practice session of the season.