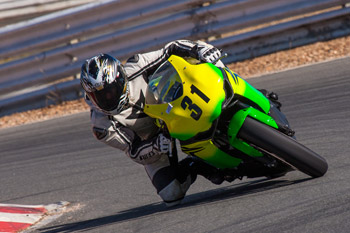 Tasmanian Shaun Murfet on track at a state meeting.

Three Tasmanian riders will make their ASBK class debut in front of a bumper ‘2+4’ crowd at Symmons Plains this weekend.

Ulverstone rider Kurt Sushames, Josh King of Rosebery and Devonport’s Shaun Murfet are all series newcomers, and will hope to use an intimate local knowledge of the short circuit to their advantage.

Sushames, who currently sits second in the Tasmanian Motorcycle Club Championship, has enjoyed a good start to the 2013 season on board his Suzuki GSX-R1000 and is looking forward to stepping up to the premier class.

“I am really looking forward to this weekend,” Sushames said. “It is a great opportunity and I am excited to be racing alongside the factory riders.

“It will be interesting to see just where we sit in the scheme of things. I am currently second in the local series so hopefully a bit of home track knowledge will put me in good stead for a reasonable result.”

With the QBE Australian Superbike Championship competing alongside V8 Supercars as part of the Tasmania Microsoft Office 365 event, Devonport carpenter Shaun Murfet said he is also looking forward to racing in front of an expected record crowd.

“It is a big step-up for all of us this weekend but it is also a fantastic opportunity,” Murfet said. “We get to pit ourselves against the best in the country.

“I have done a lot of miles around Symmons Plains so I am really looking forward to this weekend’s event.”

Completing the Tassie trio is Rosebery’s Josh King, a recent newcomer to the sport. The 28-year old father of one who raced motocross and supermotard made the switch to road racing 18 months ago.

“While I haven’t been road racing for as long as the others, I started riding when I was 6 years old and raced motocross and supermotard for many years,” said King.

“This weekend for me will be about learning all I can. I want to take as much as I can from the weekend.”