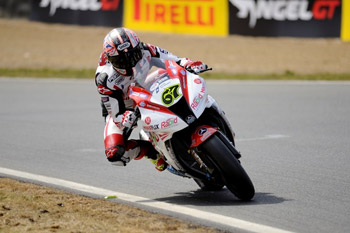 Shane Byrne was in top form at Brands Hatch.

Kawasaki’s Shane ‘Shakey’ Byrne got his title defence off to a flying start at the opening round of the MCE Insurance British Superbike Championship season at Brands Hatch.

First and third placings from the event sees Byrne take the points lead after round one ahead of Alex Lowes and Australia’s Josh Brookes.

Byrne admitted he would rather play follow the leader in the early stages of the opening race so he could assess the pace of rival riders.

“I had a better start than anticipated and found myself leading the race at the start,” said Byrne. “At the beginning I might as well had been riding to the shops as I didn’t want to be leading for 30 laps because the circuit is short and then you push harder and you never know what the other guys will have in reserve.

“I cruised about then Josh passed me and that was cool, so I could see what he had. I upped the pace in the last laps to try and get a bit of a gap and from then on tried to be consistent and it paid off.”

He was in the running during race two before a late mistake cost him the chance to challenge eventual winner, Milwaukee Yamaha’s James Ellison, for the race lead.

Ellison was seeking to make amends from his own error in race one and was relieved to hold off the advances of Byrne in the closing stages.

“It was great to bounce back in the second one from the schoolboy error in the first race as it was really disappointing,” said Ellison.

“It is bittersweet as we didn’t show what we were capable of in the first one as I could do the times consistently but knew we had to get a good start and step up.

“I really enjoyed being out the front with the other guys and full credit to the Milwaukee Yamaha team as we have had an impressive start to the season.”

Tyco Suzuki’s Josh Brookes finished with a third and a fifth place after a solid day of racing.

“I’m fairly happy with the weekend and I don’t want to use not having track time as an excuse, as no one really has coming into this round,” said Brookes.

“We worked through with a new set-up on suspension and it wasn’t perfect straight away, but by the time we got to race day we were in a good range and the tyre lasted pretty well for us in both races.”

“It has been a bit of a tough one for me but I also think that I have learnt a lot this weekend and it is good for me to get these races under my belt,” said Waters.

“I didn’t qualify well and that made it really difficult for race one. I was able to move up the order and then I was happier in race two as I was in the battle for ninth place and try and push a bit harder.

“I need to congratulate the rest of the team and also James for the win in the second race as that shows what everyone in our garage is capable of and we want to come back stronger at Thruxton.”

Waters’ solid weekend puts him in 13th place overall on the BSB standings.

Seeley had fired off the line ahead of teammate Ben Wilson and Stuart Easton, but the Mar-Train Yamaha rider couldn’t make it a double as he crashed out at Graham Hill Bend ten laps into the race.

At the front the leading pack of Seeley, Wilson, Billy McConnell, Glen Richards, Luke Jones and Graeme Gowland were pushing each other hard and were consistently swapping places.

Wilson had taken the lead from his team-mate before Seeley took the lead again but as the pair fought McConnell came through to hit the front on the Smiths Racing Triumph.

McConnell and Seeley then fought for the lead, but it wasn’t until the final lap that Seeley could finally hold off the challenge as the Smiths Racing Triumph rider drafted Wilson to the line for second. Luke Jones claimed fourth ahead of defending champion, Australia’s Glen Richards.

Wilkinson and Day both leave the opening round placed within the top ten riders in the competitive class.