As Australia’s newest MotoGP regular, former ASBK champion Bryan Staring is enjoying his time at the top of the sport.

The path of West Aussie Bryan Staring to MotoGP has been a spectacular one, winning the 125GP, Supersport and Superbike titles in Australia before departing to Europe in 2011, he’s just completed his first weekend as a grand prix regular.

Staring was signed for the Team GO&FUN Honda Gresini squad following two supremely promising years in the Superstock 1000 FIM Cup, taking on the challenge of the team’s CRT entry on an FTR Honda alongside prototype-equipped teammate Alvaro Bautista.

Qatar’s season-opener wasn’t an easy one for the 25-year-old as he qualified 23rd before crashing out early, however it formed the foundation for a solid season ahead despite his relative inexperience.

CycleOnline.com.au’s Alex Gobert caught up with Staring this week to speak about his debut, the CRT bikes, Gresini Honda and his relentless approach to arrive in MotoGP. As you’re about to see, he’s grabbing this opportunity with both hands and won’t surrender until it’s a success. 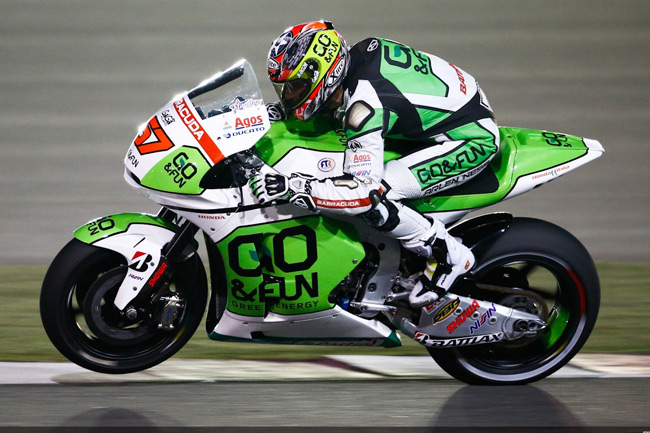 Bryan Staring in his debut MotoGP outing under the lights of Losail. Image: MotoGP.com

First of all, your first MotoGP weekend is out of the way. You didn’t quite get the experience you were hoping for during the race, but overall how was Qatar?

Well, it’s difficult to answer because the race was such a disaster, but all in all it was still a good experience I guess. I learnt some things in the race that I needed to know and in the lead-up to the race, from FP1 through to FP4, we made significant improvements. And again my confidence came along with the motorbike. Even though my qualifying position wasn’t so good, at least I’m happy with the progress we made and the feeling of the bike.

The reality is that we weren’t really too far from a lot of the bigger names inside the CRT category. For that I’m happy, we’re not too far from where we need to be, but it’s all a work in progress. I know as well as anyone does that nothing happens in this sport overnight – it’s a long year and I’ll keep chipping away at it. I’m absolutely confident that things are only going to get better.

You were thrown in at the deep end in some ways, at a new circuit in Qatar, which is difficult to learn and very flat, you were racing under lights for the first time, on an all-new bike and with riders you haven’t raced against before. So considering all that, did you get a chance to enjoy the weekend at all?

Yeah, that’s a really good question, because it’s a big thing being in MotoGP, in this paddock. I guess I’m old enough now to try and take a step back to enjoy my surroundings, but it’s not easy to do because you’re always so focused on the task that you need to achieve – especially if it’s not going well, because it makes it hard to enjoy.

But anyway, I feel like I’m enjoying it the best I can. I have a really big workload and a difficult task to do, but I am so happy to be here inside this championship, to be with the team I am with, and to be racing against the fantastic riders I’m competing against. As far as that goes, I’m appreciative to be here and am certainly enjoying the challenge.

Tell us a little bit about the CRT bikes from an Australian perspective. You’re the first Aussie to race one, so what’s your opinion on it? Does it remind you of anything from the past in your career?

The bike isn’t really comparable to anything I’ve ridden in the past due to a number of different reasons, really. Basically the thing feels like a grand prix bike. If anything, it reminds me the most of my RS 125, obviously with a lot more power. It’s taking quite a lot of adapting to because the chassis is so stiff and the Bridgestone tyre is so hard – the front especially. It doesn’t give you any movement, which is quite different to what I’m used to. For those two reasons alone, the bike is completely different.

The riding technique is really different, it’s not so important to have the throttle on the stop the whole time, more so it’s a finesse of keeping high corner speed. At times, it seems as though the idea is to keep the corner speed so high that you can only open the throttle a little bit and it’s the fastest way around. All of those things are different for me and not what I expected.

I guess because this bike has a Superbike engine in it, I expected it to be reasonably similar to what I know, but that’s definitely not the case because it doesn’t handle like a Superbike and you can’t ride it like one. That’s only two components of the bike, the frame and the tyre, then there’s the brakes and the electronics.

From an Australian perspective, the electronics are far more advanced than anything in Australia and certainly more advanced than any I’ve ever used. The brakes are a complete other challenge alone, so it’s taking a hell of a lot of adapting to and I’m still learning how to get the most out of it. I’m still building my confidence up as well. When it’s not going smoothly, it’s a wild ride, but anyway it is an enjoyable bike to ride and has an enormous amount of grip. I’m enjoying the challenge of it. 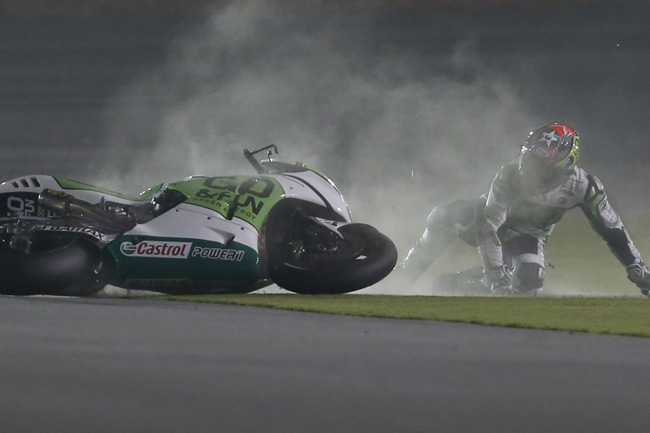 Aside from Staring’s crash there were plenty of positives to come from Qatar. Image: MotoGP.com.

You mentioned earlier the distance between yourself and the top CRT entry. That’s obviously a goal of yours, your realistic competition in the series, so do you have any real expectations or goals? Or is it a case of taking it one weekend at a time?

Yeah, just taking it one weekend at a time. The correct answer is to say that I just want to do my best, really give it everything I’ve got, and that is absolutely all I can do. But of course in the back of my mind I am looking at the front CRT guys, it’s a race within a race and everybody who knows the sport understands that.

At some stage you need to compare yourself to the other riders and other bikes. This year it seems the front CRT riders and bikes are pretty well advanced, it seems to be a good package, and they are doing a fantastic job, so that’s a long term goal.

But the next step back from there is something that I think is quite achievable and I think that’s the goal in the meantime. It’s to be involved in the race, in the pack with the CRT guys, and hopefully to fight it out toward the front of the CRT race. Really, every time I get on the bike I ride my arse off and I can’t ask for anymore – that gives me a lot of satisfaction and motivation to keep improving and moving forward.

How has it been working with Fausto Gresini and the GO&FUN Honda Gresini team? They have a prototype and also your CRT entry, it’s a team with a lot of success in the past, and quite a historic team. Has it been a positive experience so far?

It’s definitely been a real eye-opener and an awesome experience so far. Fausto has been great, as well as the guys in my team and the guys on the other side of the garage in Alvaro’s team. It’s very close-knit and everyone has made me feel a big part of the family, so we’re all working in the same direction.

Plus, the experience of the team is incredible – the way I see them work is like nothing I’ve ever seen before. The guys on the spanners know every inch of the motorbike, they change things during a session that I never though possible, and they absolutely work their butts off. I feel bad when I leave the circuit because I can’t stay and wait for them to finish otherwise I’d be waiting all night.

The CRT bike takes a lot of work because it has a lot of different brands manufacturing parts for one motorbike, so that takes a lot more work to make sure everything fits and aligns perfectly before we get on the race track. So, I can’t speak highly enough of my team, the way they support me and are 100 percent behind me. They are very patient with me as well, so I look forward to a really good season with these guys.

To wrap this up, I was there at Magny-Cours in 2010 when you went to knock on a few World Superbike garage doors, hoping to get a start in Europe for the following season. You ended up doing that, did two really strong seasons in Superstock, and now you’re in MotoGP against the best in the world. I know you’re concentrating on the job at hand, but have you considered your achievement, making it to MotoGP so soon after winning the ASBK title just a few years ago? It’s a pretty incredible feat.

Just from the things I’ve learnt in my career so far, you have to appreciate what you achieve because it makes you smile and it makes you happy, you know? You have to be satisfied with what you’ve done, or you live a lifetime of looking for more and never really get the chance to enjoy what you’ve actually done. So, I am really proud of the way I’ve been able to climb the path to this level, especially with the crisis going on and the demand of riders to bring money and everything.

I feel like I’ve found a way to get through without being affected by it all. I’ve been lucky in some regards, very lucky, but I have also sacrificed something every year to put myself in a position where I can progress. Not every year have I seen the light at the end of the tunnel, but some years I’ve certainly seen much bigger years than others – it’s all been worth it.

And that trip that you speak of at the end of 2010, that really was a priceless one for me that gave me my start here. It is funny to think it was only a few years ago that I was banging on garage doors and there wasn’t one person in that whole paddock who knew who the hell I was. I’m proud of the fact that I can say I changed that and it’s awesome, my career path is well and truly on track.

The thing that’s difficult though with racing is that it can very easily go the opposite way. If I didn’t get this opportunity that I’ve got now, the reality was that I wouldn’t be riding a bike anywhere near this level with this competition. Some things work out well and you’re smiling, but everything only comes together at the 11th hour, a lot of the times you don’t know where you stand. You have to be appreciative of where you’re at all the time.

Well I can definitely say on behalf of all Australian fans, there’s a lot of support behind you and everybody is hoping for the best. We wish you the best of luck for the coming rounds and the rest of the season – we’ll stay in touch.

Perfect, thank you very much and I appreciate that.