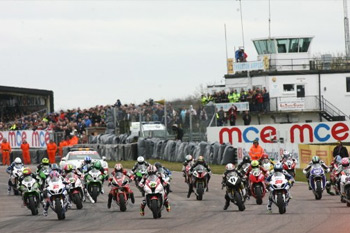 The British Superbike field races for the first corner at Thruxton. Image: BritishSuperbikes.com

Kawasaki’s Shane ‘Shakey’ Byrne surpassed the all-time race wins record at Thruxton with a double victory at the second round of British Superbike competition taking his tally to 44.

Byrne lead the field away in race one before Samsung Honda’s Alex Lowes took back the lead before the end of the opening lap. The pair forged forward with Byrne’s teammate Keith Farmer joining the battle.

Within reach of the frontrunners, Australia’s Josh Waters would then crash out of contention at the circuit’s ‘Village’ section. The Milwaukee Yamaha pilot was fortunate to walk away unscathed from the incident in one of the fastest sections of the track.

A lap six safety car period brought the field back to Byrne who was able to re-build his advantage after the restart. When Tyco Suzuki’s Australian rider Josh Brookes passed Byrne, the Kawasaki rider plotted his final passing attempt and executed it with brilliance in a last lap move to hand him the win by 0.301s.

Alex Lowes was a further three-tenths behind, with the gap to fourth-placed Buildbase BMW’s James Westmoreland over six seconds. His teammate, Jon Kirkham, would round out the top five placings in an eventful race one.

Byrne took the early lead in race two but another safety car period compacted the field early on. Ryuichi Kiyonari, a triple BSB champion and man touted most likely to challenge Byrne, was the cause of the yellow flags as he crashed out, also unhurt.

Byrne defended his lead when the race resumed, with Brookes moving through to third to challenge Lowes. A recovering James Ellison, teammate of Milwaukee Yamaha’s Waters, put in a storming recovery ride to buy into a podium place, and would eventually finish third behind Lowes after Brookes dropped back.

Easton won the sprint by 0.248s over Alastair Seeley and a further 0.574s over Ben Wilson. The Smiths Racing Triumph of Billy McConnell was fourth, while Australian teammate Glen Richards was a non-finisher after a high-side crash saw his bike severely damaged before it caught fire.

The second race again belonged to Easton, who closed to within two points of Alastair Seeley on the standings with a perfect performance. Ben Wilson came home second, while Seeley consolidated for third.

McConnell was solid again in fourth, allowing him to maintain his third place overall on the standings, while Richards recovered from the earlier incident to round out the race in fifth place.

Tim Hastings emerged victorious by a 0.403s margin over Jordan Simpkin in the 14-lap Superstock 600 race.

After back-to-back events the BSB field will now have a short break before round three action resumes at the picturesque Oulton Park circuit.