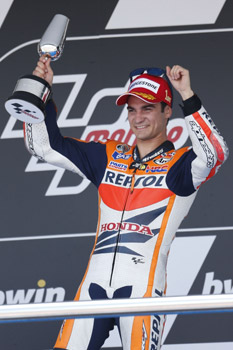 Dani Pedrosa celebrates his victory at the Spanish Grand Prix.

Spanish riders have celebrated a 1-2-3 finish at their home MotoGP race, with Dani Pedrosa managing the tricky conditions to take a deserved win at Jerez.

While it was Pedrosa’s victory – and a brilliant one at that – he again found himself shy of the spotlight as the race came to a close, with all eyes on the dramatic clash between Jorge Lorenzo and Marc Marquez on the final corner.

The pacesetter of the weekend, Yamaha Factory Racing’s Jorge Lorenzo looked like he would be the one to beat when the race went green, and, after Pedrosa led for a brief moment, the defending champion’s YZR-M1 soon took charge.

Marquez was third on the opening lap, momentarily displaced by Valentino Rossi who looked quick early, but was ultimately forced to surrender the same spot by the end of the next lap.

Up front, Pedrosa was keeping Lorenzo in check, fully aware of his countryman’s ability to break away from the battle pack, given any hint of chance.

By lap five, the Repsol Honda rider saw the opportunity, forcing a pass for the lead. Lorenzo didn’t give an inch but ultimately lacked the track position as the pair exited the turn, handing the lead to Pedrosa.

As the race continued Pedrosa began to build upon his lead, with Lorenzo seemingly suffering from a lack of front end grip as he drifted wide through a series of corners.

The scorching track temperatures and a unified problem with front tyre feel may have contributed to a series of crashes early in the piece. Stefan Bradl, Andrea Iannone, Lukas Pesek, Jonny Hernandez and Randy de Puniet were all out early, as the initial stages became a balancing act of just how hard to push on the greasy circuit.

With Pedrosa seemingly not seriously affected, the focus was soon on the arm wrestle for second place, with Lorenzo suddenly forced to take defensive lines as Marquez sniffed for the overtake.

A number of times the two came close to contact, with Marquez pouncing on Lorenzo as as he appeared to drift wide of the corner apex before the door was shut firmly in his face.

The early battle between Rossi and Cal Crutchlow would not eventuate, with the Brit – a pacesetter early in the weekend – falling back into the clutches of Gresini Honda rider Alvaro Bautista.

It meant a lonely ride for Rossi, who was lapping consistently yet well off the speed of the leaders.

With five laps remaining the gap between Lorenzo and Marquez began to close again, with the Yamaha rider’s advantage being whittled away with each tour of the circuit.

Pedrosa had backed off to a manageable two-second lead, and all eyes were rightly fixated on the battle between the reigning MotoGP and Moto2 champions.

Just when it looked like the Yamaha would have the edge, Marquez made a huge dive for the position, quickly countered by Lorenzo, but kept enough momentum to line up a pass at the final corner – ironically, named ‘Jorge Lorenzo Corner’, just yesterday.

It may have been a bad omen for Lorenzo, who left the door ajar an inch, and Marquez didn’t need an invitation, forcing his Honda into the gap and making considerable contact in the process.

The rookie ran away with second place, with a despondent Lorenzo, who was left shaking his head as he crossed the line, taking third and the final spot on the podium.

Despite the searing afternoon heat there was a frosty feeling from the Yamaha camp, unable to believe what they had just seen. Lorenzo’s body language – and subsequent dismissal, with a wave of the finger, of Marquez – said it all.

The move not only secured a second consecutive Honda 1-2 finish, it also meant Marquez moved clearly into the championship lead, with Pedrosa second and a seething Lorenzo third.

Rossi held down fourth place for the race, with Crutchlow home in fifth and Bautista in sixth. Nicky Hayden was the first Ducati home in seventh, with Andrea Dovizioso eighth.

Aleix Espargaro was again competitive against the prototypes, finishing ninth ahead of Bradley Smith who was tenth overall.

Despite the early string of crashes, there would be no more retirements from the race after lap five.

Moto2 race victory went to another Spaniard, with Esteve Rabat converting his pole position to a win, holding out Scott Redding in second and Pol Espargaro in third.

Rabat’s lead had built to over four seconds as he crossed the finish line, with Redding also enjoying margin as he greeted the flag.

Espargaro stole the final podium spot from Takaaki Nakagami, with Nico Terol, the winner of the previous grand prix, finishing in fifth.

Xavier Simeon eventually got the better of Jordi Torres, taking sixth after a spirited battle, with the top ten rounded out by Dominique Aegerter, Toni Elias and Marcel Schrotter.

Second place in the standings coming into the race, Mika Kallio was sent tumbling down the ladder after a crash at Dry Sack corner, with British riders Danny Kent and Kyle Smith also coming unstuck in a long, hard race.

Rabat takes over the championship lead with a single point over Redding, while Espargaro holds down third as riders look ahead to the next round at Le Mans.

Team Calvo’s Maverick Vinales was awarded the win in the Moto3 class, with the race stopped on lap 17 as medical staff attended to Alan Techer who had crashed on the circuit.

Vinales engaged in a close battle with pole sitter Alex Rins, before the latter lost the front end at Alex Criville corner and allowed the former into the lead.

Meanwhile the KTM of Luis Salom was coming quickly, and soon locked onto the back of Vinales, looking to make a move as the race entered its final stages.

Salom’s charge would prove unsuccessful as the red flag was waved, the Spaniard settling for second behind Vinales, with German Jonas Folger third.

Arthur Sissis was the top Aussie home, finishing 12th, with a displeased Jack Miller taken out by an errant move from Miguel Oliveira as he settled into fourth place.