Weather finally clears on the Isle of Man as big names get down to business. 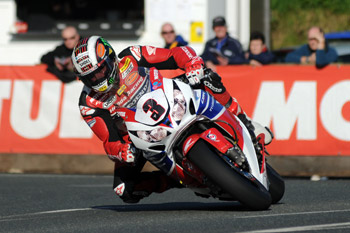 John McGuinness broke the 129.0mph barrier as practice finally resumed at the Isle of Man TT.

The session marked the first timed outing for the class since last Saturday after three previous attempts were classified untimed due to safety concerns.

A handful of the frontrunners set bank laps before the times began to tumble. The HM Plant Honda of Bruce Anstey broke the 128mph barrier (128.05mph/17m40.755) before his effort was bettered by fellow Honda rider, TT legends entrant John McGuinness.

McGuinness raised the bar with a 129.07mph/17m32.338 lap which Anstey would counter once more. Both riders had pitted following their fourth lap and McGuinness had the final say with a 129.32mph effort proving the best of the session.

McGuinness’ TT Legends teammate Michael Rutter was the third-fastest man as the session came to a close, setting a 128-flat to narrowly edge out Martin. Michael Dunlop – the third TT Legends Honda entry – was the fifth-fastest rider on course.

Cameron Donald was the top Aussie at the conclusion of practice, lapping his Wilson Craig Honda machine at 126.96mph.

Josh Brookes continued his barn-storming run in what his is IOM TT debut, setting a series of consistent laps within the 120mph bracket. His best, a 121.99mph pass, saw him lap the course with a time of 18m33.472.

Brookes said he was enjoying the challenge and was pleased to finally get the chance to go out on track again.

“I really enjoyed it tonight and the laps came to me pretty naturally, but that’s exactly what we need, is laps, after missing a couple of sessions,” he explained. “The Superbike is spot on and the Metzeler tyres are working really well for me.

“The Superstock bike needs a bit more work but that’s only because I’m not used to riding it, although we are going in the right direction.”

The British Superbikes frontrunner is closing in on the record newcomers lap of 125.8mph, currently held by Steve Plater.

Practice is scheduled to continue today, weather-pending, with the six-lap Superbike race to follow over the weekend.