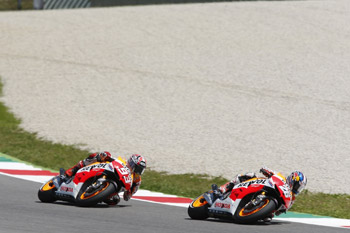 Dani Pedrosa leads the way from Marc Marquez at Mugello.

Marquez crashed several times in the lead up to the race, and lacked the momentum from session to session as his teammate completed a relatively trouble-free lead up.

Pedrosa said Marquez’ job was made easier as he received data directly from the opposite side of the garage.

“The race Marc did was amazing, especially after that massive crash he had on Friday and also Saturday he was not fine,” Pedrosa said to Catalunya Radio.

“But as we know he copied our bike setup. They gave him all the information we had gathered in order to improve traction and that certainly made things easier.”

It was the second time the subject was raised over the weekend as tensions simmered between Pedrosa and Ducati’s Andrea Dovizioso, the former claiming the latter had benefited from settling into his slipstream in qualifying.

“I don’t want to pull the riders to find then them ahead of me in the grid,” continued a disgruntled Pedrosa.

Marquez, meanwhile, has openly told of his strategy to learn the circuit on the MotoGP machine behind his teammate.

“I followed Dani once again for a long time,” said Marquez. “It happened also in Qatar and at Austin and I have learnt many secrets I could use in the next races.”

Marquez ultimately crashed out of second after passing his teammate, but would have climbed to just 2 points behind his teammate had the running order remained the same.