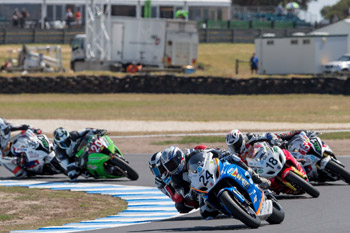 Tainton told CycleOnline.com.au that he believed the current rules created a level of parity between motorcycle brands that would be removed if regulations were simplified.

“As far as technical rules go you’ve got a BMW leading it, Suzuki second and Honda third, and that could all change at any time or any track,” said Tainton.

“I think the technical rules produce good parity. I think if we had a stock rule class then the fastest bike of that year would just dominate, therefore the interest wouldn’t be there.

“I think we should work with what we’ve got.”

Tainton said the ever-present issue of grid sizes was due to the current economic climate rather than the level of modification required.

“I’ve always voiced my opinion on the technical rules, for the series I think they’re great,” he said. “We’re in a tough economic time to be promoting motorcycle racing of any form.”

BMW, Suzuki and Honda are currently the only manufacturers present in the Superbike class. Yamaha, Ducati, Aprilia, KTM, Kawasaki and even MV Agusta have all participated at varying levels in the past decade.