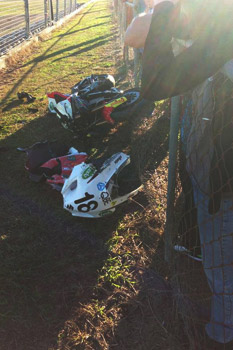 Queensland Raceway and Motorcycling Australia (MA) officials have moved quickly to implement new safety measures at the circuit after two motorcycles were sent cartwheeling over a catchment fence in separate turn six incidents at the weekend’s third round of the Australian Superbike Championship.

It is the first time in 13 years that multiple incidents of this nature have been seen at the 3.12km, six-turn Ipswich circuit.

The first incident occurred in the final Supersport practice session on Friday when Michael Lockart’s Kawasaki was sent into a spin when it ran into the gravel trap. Momentum sent the bike over the debris fence before coming to rest in the fenced-off area.

The second incident occurred in the second and final Superbike race of the day when Ben Henry’s Cube Racing Suzuki ran on at the final turn. The bike was sent skyward as it made substantial contact with the tyre wall before also landing within the bounds of the specially-designed safety zone.

Queensland Raceways general manager Keith Lewis hoped the additional measures, including the establishment of a new tyre wall, would prevent such incidents reoccurring in the future.

“We had the incident occur on two occasions,” explained Lewis. “In discussions with senior MA officials we’ve agreed to put an extra tyre wall in at the back of the gravel trap which should prevent it from ever happening again.”

The new tyre wall will be a further four metres in from the current wall in place.