Honda begins evaluation of next year's prototype at Motorland Aragon. 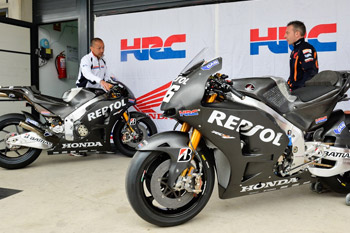 Honda’s 2014 prototype racers were dressed down in a plain black livery for the test. Image: MotoGP.com.

The Honda Racing Corporation’s (HRC) 2014 MotoGP challenger has turned its first official testing laps at Spain’s Motorland Aragon, though much of the day’s track running was interrupted by heavy rain.

Repsol Honda and the factory’s satellite squads, LCR Honda MotoGP and GO&FUN Gresini, were present at the test, though only Stefan Bradl and Alvaro Bautista would take to the track in light of the torrid conditions.

Between them, Bradl and Bautista turned just 27 laps, and Honda remains hopeful of improved weather for a second day of test running today.

If signs are positive, then the manufacturer may choose to introduce the 2014 prototype later in the season, as it did for Dani Pedrosa last year.

“This is the prototype of the 2014 machine,” said Repsol Honda technical director Takeo Yokoyama. “It is a completely new bike, both in terms of engine and chassis.

“Our plan is to test it now in order to be able to make, eventually, some changes before the post-race test in Valencia in November.

“Anyway, if Dani and Marc find something on the bike that they feel is a really big improvement compared to their actual RC213V, HRC will do its best to provide it already later this season as we did last year.”

Honda will be joined on track at today’s test by both Yamaha and the Suzuki test squad.