Lorenzo and Marquez under record pace in Aragon test

Yamaha and Honda both competitive as conditions improve in Spain. 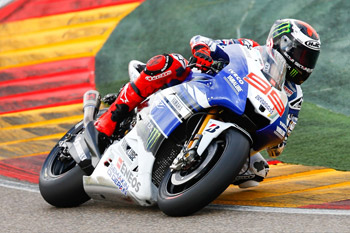 Yamaha Factory Racing’s Jorge Lorenzo has topped the second day of MotoGP testing at Aragon in Spain, lapping beneath record pace in a promising showing for the manufacturer which went head to head with rival Honda.

Lorenzo and Repsol Honda rookie Marc Marquez both dipped below Casey Stoner’s pole record effort, with the Yamaha pilot rounding out a productive day on a best lap of 1m48.076, around four-tenths clear of Marquez.

Lorenzo and teammate Valentino Rossi worked on a set program of setup changes while putting a new Bridgestone tyre compound through its paces.

“Compared to normal I’ve been stronger,” said Lorenzo. “At this track normally I suffer many problems in setting up the bike and getting the bike to work like in other tracks.

“This time from the beginning I have been very competitive with a lot of confidence. Also I think I am in very good shape so I have taken profit of it.

“I could also test a new tyre to put myself in a qualifying situation and I did a very good lap time.”

While Marquez and his Honda team have been at the circuit for a total of two days, the inclement weather on Tuesday meant they factory riders did not take to the circuit at all.

The rookie rider was happy with the result of a full day of test running at a track he has not yet sampled on the MotoGP machine.

“I am happy with today’s test,” said Marquez. “Aragon is one of my favourite circuits and on a MotoGP bike it is a lot of fun!.

“At the beginning it was difficult, as many of the braking points are blind, but in the end I felt comfortable. We did a good test trying to solve a problem we had in the last couple of races.

“We did some changes in the geometry and we found a good base set up that I believe will be useful also in the coming circuits and not only here.”

Teammate Pedrosa was third-fastest, testing his current machine and also turning laps on the 2014 prototype. With his test objectives complete, he will not continue today, while Marquez will stay on and have his own hitout on next year’s machine.

Rossi was fourth from Gresini Honda’s Alvaro Bautista, who registered two solid days of track time and was able to test a new Showa rear shock along with various braking components.

Randy de Puniet and his Suzuki MotoGP test crew experienced some braking issues on their first day of testing and will hope to rectify these with another day of track work.