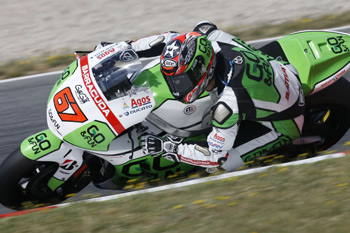 Bryan Staring heads to the Assen TT with solid experience behind him.

Australian MotoGP rider Bryan Staring is eager to show his potential on the GO&FUN Gresini Honda CRT at the Assen TT, finally set for a start at a circuit he has prior world championship experience upon.

Fresh from scoring his first MotoGP points in Catalunya, a buoyant Staring said he would go to the Cathedral with a different approach to the previous rounds where he has had to learn the track from scratch.

“After a positive result in the Catalan Grand Prix, where I scored my first World Championship points, I go to Holland with a different approach,” said Staring.

“I feel motivated and confident about this race especially because I finally won’t have to spend time learning the track. I already know it!”

Staring is hoping to make the most of the early practice running to develop a solid base setting on the FTR Honda.

“I really like Assen and I will be able to start work on the machine straight away,” he said.

“I am desperate to do well this weekend and get the most out of the bike so that I can show my potential.”

The Aussie is acquitting himself well in the MotoGP ranks and has worked feverishly to develop the category’s only CBR1000RR-powered Claiming Rules Team entry.

He is classified 22nd on the world standings after taking two points at the previous round in Spain.