Fifth position at Assen better than any victory, says Lorenzo 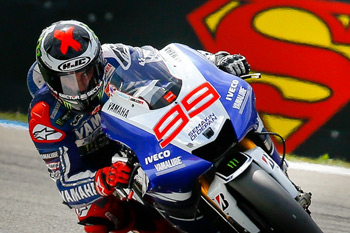 Defending MotoGP World Champion Jorge Lorenzo shared the spotlight with his winning teammate on the weekend as he broke through the pain barrier to ride to fifth place with a broken collarbone.

Lorenzo was the early pacesetter on the Assen TT weekend but his hopes of a third consecutive race win went begging when he crashed at a high-speed section of the track in a wet afternoon practice session.

The Spanish rider quickly learned that he had broken his collarbone, and already his team had set about preparing for his comeback at the following event.

Defying intense pain and discomfort, Lorenzo left the circuit and flew to Barcelona for emergency surgery, before making the surprise decision to return to the Netherlands the following day.

“It would have been impossible to believe some minutes after my crash that this could happen,” reflected Lorenzo. “We were brave to do the operation the same day, (but) if I had waited until Friday the doctors would not have let me race.”

Circuit medical personnel passed him as fit for the race, and to the shock of the paddock and the sport’s fans, he took to the track for a start on Saturday.

Lorenzo had to start the race from 12th but by the second lap was factoring within the top five. He made it to fourth before sheer exhaustion crept in – he would drop a spot to fifth but claim crucial championship points.

“I felt quite good physically at the beginning of the race but after lap seven every lap was worse,” he added. “It was more difficult to change direction, to brake and to accelerate, so I couldn’t do more than fifth position.

“This fifth position is better than any victory I have had in my career. I hope to have a good recovery for Germany; I will not be one hundred percent but I hope to be better than here.”

Just nine points separate the factory Honda and Yamaha riders in the race for the world title.