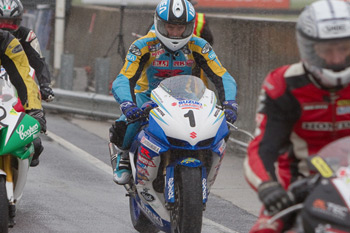 2010 Australian Supersport Champion Troy Herfoss will make a surprise return to the class at the Sydney Motorsport Park ‘double-header’ round of the Australian Superbike Championship (ASBK) on 1-4 August.

Herfoss has confirmed he will pilot a Warwick Nowland Racing (WNR) Kawasaki ZX-6R for the four-day event, which comprises round four and five of the championship.

The Australian rider had been in the frame to ride a leading machine in the IDM German Superbike Championship this year but elected to return home prior to the season start.

The late change of plan saw Herfoss confined to the sidelines and he said he had accepted the fact that he would be without a ride for 2013 prior to the opportunity with WNR arising.

“Warwick said he was keen to do Eastern Creek (Sydney Motorsport Park),” said Herfoss. “He put the message out on Facebook and I responded to that. He called me up straight away and offered me the seat, which I’m appreciative of.

“Obviously my whole situation changed for 2013 very late so I didn’t really expect to find a ride. I’m at home now and really looking forward to racing in Australia again and keeping myself in the game for next year.”

Herfoss is keeping his expectations in check but said he was looking forward to riding the ZX-6R.

“Back in 2008 I bought a bike from Kawasaki, a ZX-6R – that was actually the first time I rode a road bike!” said Herfoss. “The Kawasaki is a good bike, you only need to look at the results in World Superbike and World Supersport from the weekend to see that.

“I’m not sure if there will be a chance to test before the round. We do get a few extra practice sessions ahead of the weekend so that should be a chance to get used to the bike. It will be a lot of fun.”

Herfoss departed Australia at the end of 2011 after finishing third in his maiden season in the 1000cc Superbike class.