West in Moto2 top 10 but expects more at Dutch TT

Aussie Ant West satisfied with another top 10 finish despite targeting a better result in the Netherlands. 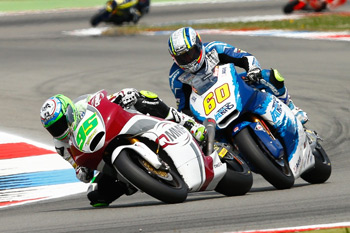 Experienced Moto2 campaigner, Australia’s Anthony West scored another solid top 10 finish at the Dutch TT but says he expected more from the race after qualifying on the second row of the grid.

West has continually proved his pace in the competitive class but is often outnumbered by the stronger Kalex and Suter chassis as he battles aboard the QMMF Racing Team’s Speed Up prototype.

From sixth place on the grid, West made a conservative start and would find himself on the edge of the top 10 for the first few laps.

The Australian rider felt he had the pace of the preceding riders but could not find the opportunity to pass them and make inroads on the leaders.

“It wasn’t a good race for me because I feel embarrassed to go backwards from sixth!” said West.

“I felt good on the bike and my lap times were fast, but I didn’t get a good run and was sort of battling to pass a lot of the guys. I felt faster than them, but I struggled to try to overtake them.”

West would hold his ground until the mid-point of the 24-lap race when his confidence in the front-end of his bike began to slip.

“Mid-way through the race, I lost the good feeling for the bike and dropped off a bit,” he continued. “I kept going backwards and wasn’t able to continue with the strong lap times, which is a bit strange.

“I expected to be more consistent, but it didn’t work out that way because I lost feeling with the front.

“I had lost the front a few times on the first laps, which was really strange, so I didn’t trust it. As soon as you don’t trust the front that little bit, everything becomes harder.”

West managed to fend off late challenges from both Julian Simon and Randy Krummenacher, and said he felt the final result didn’t reflect the progress or speed he had shown throughout the event.

“Other than the 10th place, we can be satisfied with the weekend,” added West. “Hopefully, we can improve from now on. The bike seems to be working reasonably well and we seem to be working in the right direction.”

He sits 14th on the Moto2 World Championship ladder after round seven of 18.