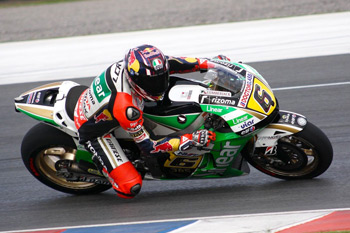 Stefan Bradl set the pace on the first of two days of testing at Termas de Rio Hondo. Image: MotoGP.com.

LCR MotoGP Honda’s Stefan Bradl has set the pace on the opening day of testing at the all-new Termas de Rio Hondo circuit in Argentina, with significant tyre wear proving to be the hot topic amongst riders and teams taking part.

Three MotoGP riders, including one CRT machine, and two Moto2 riders took to the track for a what would be a conservative series of laps early before slashing their times later in the day.

Bradl was the pacesetter across both sessions, setting a 1m47.075 lap on his final tour of the 4.8 kilometre circuit in the morning before shaving close to three seconds off the time in the afternoon session.

His 1m44.188 lap would prove to be 0.343 seconds quicker than GO&FUN Gresini’s Alvaro Bautista, with Monster Tech3 Yamaha’s Cal Crutchlow third-fastest, around a second off the top time.

Bradl enjoyed the opening day of track time and said he felt the circuit would suit MotoGP to a tee.

“It’s a really nice racetrack,” said Bradl. “It suits the MotoGP bike really well. The track is still quite dirty but it is getting better step by step. It will be perfect for MotoGP racing.”

Crutchlow, meanwhile, was surprised at the willingness of the Honda riders to push the limits on the largely unknown racetrack.

“It is brand new, still very dirty and fresh,” said Crutchlow. “Some people are taking risks, some are not.

“We have used two sets of tyres so far and after four or five laps they are completely destroyed.”

The Briton was pleased with the welcome that Argentinian officials and fans had extended to the attending MotoGP riders and teams.

“We have had an absolutely fantastic welcome in Argentina and after seeing the enthusiasm for MotoGP I’m really happy to be finally out on track to demonstrate what a spectacle the fans will see next year,” he added.

“The track has a good mix of long and fast corners and some are tight, so it is very important to get into a good rhythm. I really like turn six, which is a long and downhill corner.”

Tuenti HP 40’s Esteve Rabat was the Moto2 pacesetter, lapping in the mid 1m48s mark at the conclusion of the first day of testing.