Yamaha Factory Racing rider concedes his health is far from the required 100 percent ahead of the German Grand Prix. 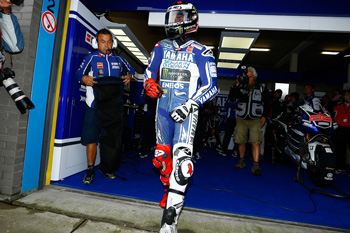 Jorge Lorenzo is remaining realistic about his chances at the German Grand Prix as he continues to fight for fitness. Image: MotoGP.com.

Jorge Lorenzo concedes he will be far from his best at the Sachsenring this weekend as his collarbone injury continues its healing process following surgery.

The Spaniard broke his collarbone in a massive high-speed crash on the opening day of the Assen TT, but was able to fly to Barcelona for immediate surgery before returning to race for a deserved fifth place.

The solid points haul keeps him in the hunt for the title and he feels this weekend he will face similar battle as he fights for fitness and comfort on the YZR-M1.

“Sachsenring is going to be a little tough for me after the crash at Assen,” said Lorenzo. “It is true in Holland we achieved a stunning result for me, the team and also the championship but I have to be realistic and I have still a long way to recover my collarbone.

“I made a huge effort to race at Assen and finally I could manage a really difficult weekend getting an astonishing fifth position.

“The situation is still that I need more time to fix the injury though. I won’t be at 100 percent in Germany but I’m pretty confident I can make a good weekend.”

Lorenzo’s regular routine has been replaced by a light recuperation program to ensure he is fit to ride at the Sachsenring while keeping his long-term health goals intact.

“At least I have had almost ten days to stay calm and improve a bit my physical condition,” he continued. “It will be difficult to compete another time but for sure I will push even harder than in Holland.

“The track is not one of my favourite tracks in the championship but at this level I don’t mind where we race. I have to give everything inside of me on each race.”

The Yamaha Factory Racing pilot’s push to fifth at the previous grand prix could prove vital in the latter stages of the championship, with points leader and main rival Dani Pedrosa only finishing one position ahead of him on track.

Repsol Honda’s Pedrosa leads the standings by 9 points over Lorenzo, with Marc Marquez a solid third.