Monster Energy Graves Yamaha's Josh Hayes gapped the field for a dominant win in front of the GP crowd in California. 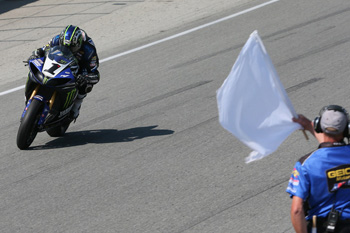 Josh Hayes was a cut above at Laguna Seca, winning with a considerable advantage over his teammate. Image: Brian J Nelson/AMA Pro Racing.

Defending AMA Pro Superbike Champion Josh Hayes rode his Monster Energy Graves Yamaha to a dominant victory in front of a packed crowd assembled at the Laguna Seca circuit for the MotoGP weekend.

Hayes, who had narrowly edged out Roger Hayden for pole, put his head down at the start of the race and was never headed as he set about building a 7.829-second advantage by the end of the 23rd and final lap.

Hayes was surprised that the win, his 39th in the class, came so easily given the closeness of the racing at Mid-Ohio a week ago.

“The race actually came to me better than any session all weekend,” said Hayes. “Things clicked well, the laps times came pretty easily, and I didn’t make any mistakes.

“It was a really smooth race for me, and I’m glad that it finally kind of came around for the race; I feel like I’ve been working hard all weekend and in the race things came a little more naturally.”

The battle for the minor podium placings was a much closer affair, with Hayes’ teammate Josh Herrin trading places with Hayden on a number of occasions before Hayden moved slightly clear.

His hunt for Hayes lasted just a few laps, with a mechanical issue ruling him out of the running and allowing Suzuki rider Martin Cardenas onto the podium.

For Herrin it was a hard-fought result after battling with Hayden early and then managing the advances of Cardenas who came on strong in the closing laps.

“The battle with Rog and Martin was good,” said Herrin. “I’m not sure what happened to Roger – bummer that he wasn’t there.

“All the work I’ve been putting in is helping. The last two laps when I decided I needed to put it down so (Cardenas) didn’t pass me somewhere, I was able to do so easily.

I think if we could have kept up with Josh at the beginning like we normally do, it would have been a tight race, but I just wasn’t able to keep up with him.”

Colombian Cardenas worked hard for a podium place and keeps himself well in the mix after having led the championship earlier in the year.

“It was a very tough race,” explained Cardenas. “I gave everything I had on all the laps. I got a little help to get on the podium because Roger had a mechanical and he was faster than me today.

“I had not the grip I wanted on the rear and was sliding all the race. I was hoping to get second position at the end but I didn’t quite have a good enough last lap and wasn’t close enough to make an attack on Herrin.”

Outside of the podium and in positions four through 10 respectively were Danny Eslick, Chris Fillmore, Geoff May, Aaron Yates, Larry Pegram, Cory West and David Anthony.

The single-race result at Laguna Seca sees Hayes stretch his advantage to 11 points over teammate Herrin, with Cardneas a further five points back.

In the Supersport race, the podium was headed by Joe Roberts, with West-division championship leader Tomas Puerta second and Corey Alexander third.