Stoner to return to Honda in significant testing role

Retired Aussie champion Casey Stoner will link up with Honda for a series of tests of its 2014 production and prototype machines. 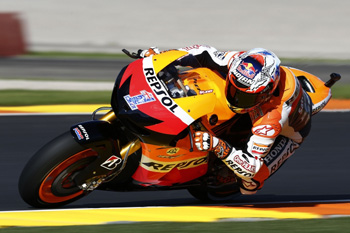 Casey Stoner will reunite with Honda in a testing role beginning at Motegi next month.

Australia’s retired dual MotoGP World Champion Casey Stoner will link up with the factory Honda outfit he departed from a mere nine months ago as part of an intensive testing shakedown of the 2014 prototype and customer production models.

Stoner sensationally left the sport at the conclusion of the 2012 season, moving back to Australia where he has since stepped into a seat in the V8 Supercars’ feeder series.

Senior Honda officials have confirmed that Stoner will join the team for a two-day test on 6-7 August at Motegi, where he will ride the prototype in development for the 2014 season as well as evaluating the brand’s new production model which would be made for customer teams to purchase.

“With testing you always want a fast rider but maybe Casey is too much,” said Honda team principal Livio Suppo.

“When you have a new bike it is good to have a test rider who can really push the limit before you give the bike to the factory riders.

“If you do something you do it properly, which is why HRC have agreed with Casey come and do a series of four test sessions in Japan.”

It is believed Stoner could participate in up to four separate test sessions in order to aid in the prototype and production machines’ development.

Suppo was quick to contain rumours that were understandably raised regarding a wildcard return to racing for Stoner.

“There have been rumors of wildcard races for Casey but this is out of the question,” added Suppo.

Stoner, who is steadfast on his decision to leave MotoGP, said he looked forward to the opportunity with Honda.

“There are times when I miss riding my RC213V so I am really happy that Honda have asked me to do some testing in Motegi this year,” he said.

“It will allow me to enjoy what I miss which is riding a MotoGP bike.”

The Australian cited personal reasons and a general dissatisfaction with the political nature of MotoGP as the main considerations for his shock decision to leave the sport.