Next Gen Motorsports' Glenn Allerton goes beneath Jamie Stauffer's 2006 benchmark effort to claim pole for the first day of the double-header. 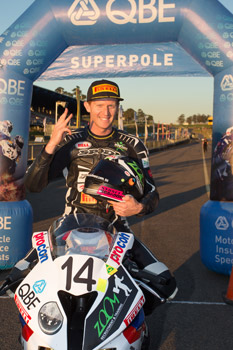 Next Gen Motorsports’ Glenn Allerton will start Saturday’s fourth round of Australian Superbike Championship (ASBK) races from pole after smashing the qualifying record at Sydney Motorsport Park this afternoon.

Allerton held out the Team Volvo Group Suzuki of Robbie Bugden by one-hundredth of a second to claim pole, with Bugden also lapping beneath the existing record on his GSX-R1000.

Wayne Maxwell was third quickest on the second factory Suzuki, from the Team Honda duo of Jamie Stauffer and Josh Hook.

Glenn Scott was impressive in sixth, from the experienced Phil Lovett. Beau Beaton, Sloan Frost and Ben Henry rounded out the 10, with surprise eliminations from Superpole 1 including Chas Hern and Linden Magee.

Riders and teams will prepare for a repeat of today’s track running tomorrow to determine the grid for Sunday’s races that comprise round five of the championship.