Sissis to target qualifying weakness for second half of Moto3 campaign 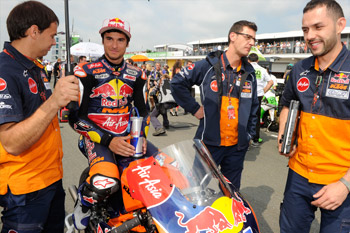 Arthur Sissis is aiming for more consistency in his grand prix campaign.

Red Bull KTM Ajo Motorsport Aussie Arthur Sissis says he is less than satisfied with the opening stanza of his 2013 Moto3 tilt and knows that he must improve his qualifying performances within the packed field to have a chance at better results.

The 18-year-old scored himself a ‘six out of ten’ on the basis of the first eight grands prix of the season.

Though he has enjoyed a solid run in the past few outings, Sissis identifies his downfall as the mid-pack grid placings, where he exerts much of his energy trying to fight his way back to the front.

“I think an important point to improve upon from the first half of the season is qualifying,” he explained. “Maybe I need to be a little faster on Saturday to get further up the order.

“During the last few races we have had a good pace, but possibly we would have done better if we had started from the front row of the grid.

“Having to start the race riding with slower riders has stopped me from reaching the leading group. Therefore qualifying is a point that I need to improve upon.”

2013 marks his second season aboard the Ajo Motorsport KTM, and the Australian rider is targeting consistency in the remaining races in order to round out the year on a high.

“This is my second year as a rider in the world championship and personally I think I still have much to learn,” he continued. “I believe that I need to improve some aspects of my riding, especially my consistency.

“My goal is to stay in the top ten. I have to try to finish as high up as possible, beyond tenth or eighth place, and be more consistent in free practice and over the entire weekend.

“I must find the appropriate setting for each race as quickly as possible, thus achieving good results.”

Sissis’ best race finish in 2013 has been eighth place, achieved in both Qatar and the Netherlands. He achieved his best qualifying performance – ninth place – at the TT Assen.

He currently sits 12th on the Moto3 standings, the same position he ended his maiden world championship campaign in at the end of 2012.