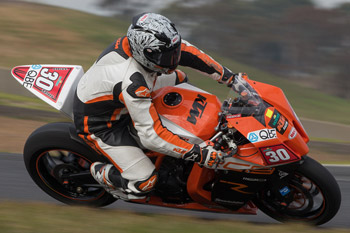 The six-time Australian Supermoto Champion made strong inroads in each session at the Sydney Motorsport Park double-header, and was able to achieve his best result of the season on the second day of racing.

Reekie carded eighth, fifth and fourth place finishes for round four before battling his way through to a breakthrough podium on the KTM 1190 RC8 R in round five, with his third place accompanying 10th and fourth places to round out a successful weekend.

He thanked Twyerould and Apro, the driving force behind KTM’s Australian Motocross Championship success, for their input.

“Honestly, I couldn’t be happier with that weekend,” said Reekie. “Rob T and Danny Apro gave me a new setup direction and I can’t thank them enough, the support from those guys was absolutely awesome.

“The bike was fantastic off the turns, and much easier to ride to its advantages in braking, turning and corner speed – mine was the best bike in those aspects all weekend – and riding the KTM to its advantages made it really easy to ride fast laps while staying really consistent.

“What’s more my new PB (personal best) here is now three seconds faster than when we were here in March!”

Reekie did not contest the season opener at Phillip Island but the consistent spread of results at Sydney Motorsport Park, along with a solid haul of points at Queensland Raceway, elevates him to seventh on the Prostock standings.