One lucky raffle ticket was all it took for Dapto’s Neville Hetherington to become the proud owner of a brand new KTM 390 Duke. 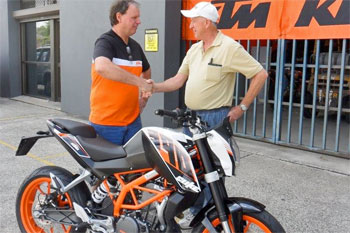 One lucky raffle ticket was all it took for Dapto’s Neville Hetherington to become the proud owner of a brand new KTM 390 Duke, the popular new LAMS-approved naked bike that combines flyweight handling and high-tech punch for dynamic daily performance.

The motorcycle was donated by KTM Australia and Wollongong KTM dealer The Dirt Bike Factory to the annual Camp Quality Convoy, which was again massively successful when it took place last Sunday in the Illawarra region of New South Wales.

Some 780 trucks and 872 bikes took part in the annual event which raises funds for the Illawarra office of Camp Quality, a children’s family cancer charity that believes in bringing optimism and happiness to the lives of cancer affected children.

Now in its ninth year, the Camp Quality Convoy again raised over a million dollars with this year’s $1,191,816 in funds bringing the total raised to over 4.4 million since the convoy’s inception.

KTM Australia and The Dirt Bike Factory have supported the event by giving away a motorcycle for the last four years, and 64-year-old Neville Hetherington was pleased and excited to lay eyes on his new KTM.

“It’s brilliant! I wasn’t sure what to expect as I’ve lost touch with the motorcycles over the years,” he said. “But I’m very impressed with the way it looks.

“I had a bike many years ago, a 1971 Kawasaki 100 that I had for eight years or so but I haven’t really ridden since then other than a few rides on mates’ bikes, so I haven’t made up my mind whether I’ll keep it or not.

“I was quite blown away when Camp Quality rang. We don’t normally win things and I still haven’t got over it, my wife bought the one ticket at Woolworths while she was getting the groceries and that was it!”

KTM general manager Jeff Leisk is more than happy to make the generous annual contribution for such a worthy cause.

“KTM believes strongly in being involved with Camp Quality through events like the convoy,” he said. “It’s a great event for a great cause and we feel privileged to do our bit.”

The presentation was made by The Dirt Bike Factory’s Anthony Gunter, the legendary former Mr Motocross champion excited to be a part of the energy the event creates.

“The convoy is just a massive thing that so many people in the area here get behind, and it’s a very worthwhile fund raiser to be involved in,” said Gunter. “The Dirt Bike Factory is proud to play a part each year.”

For more information on KTM Motorcycles, visit www.ktm.com.au or www.facebook.com/ktmaustralia.