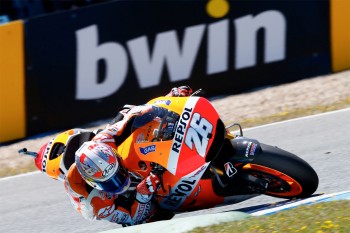 The procedure was performed at the Quiron Dexeus University Hospital by Dr. Xavier Mir, with Pedrosa having begun to feel the affects of arm-pump several days ago.

The Spanish rider will now rest in order to be fully fit for the next grand prix, with the fifth round of the season taking place at Le Mans in France on Sunday, 18 May.

Pedrosa has finished on the podium in the last eight races, dating back to his victory in Malaysia last October. Fresh from finishing third in Jerez last weekend, he sits second in the championship, 28 points behind teammate Marc Marquez.