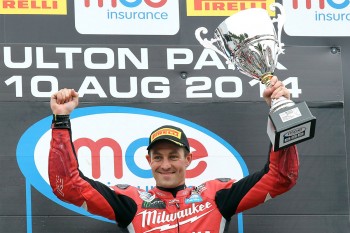 Milwaukee Yamaha’s Josh Brookes claimed the final race win of the weekend at Oulton Park as the Australian claimed his fourth victory of the season in commanding style.

In the second race of the weekend Brookes had initially taken the lead before battling with Ryuichi Kiyonari as he continued to close down the podium points to championship leader Shane Byrne. The Australian had to settle for second place but in the final race he won in dominating fashion by over seven seconds.

Brookes said: “I guess the first race today was quite similar to yesterday, despite the conditions being different. I went through Druids on the first lap trying to break everyone. I thought if I could go through at speed where nobody else was perhaps willing to, then they might give up a bit and think let him do it, but I think it was too early in the race.

“There were a lot of laps and I led for as long as I was daring to at the start. I could see I wasn’t getting a gap on Kiyo but I just kept trying to push and he just stuck to the back of me like glue! We were quite even and I just kept pushing him. I was making mistakes and wasn’t able to capitalise but I rode the best that I could.

“In the second race today I knew I needed to get away as there was one real dry line and otherwise you would have to go off on the damp part to make an overtake. I tried really hard to get a good start as I knew I wanted to lead give myself the best possible chance. I had a massive lunge into the first corner and I was able to take the lead. Once I got there I was then thinking ‘how fast should I go?’.

“The first lap through Druids I didn’t have movement, but I had a sense of where the grip was and I wasn’t sure how hard to push. Once I got into it, I felt more natural and then there was some light rain. I waited to see lap on lap and fortunately it stayed dry so I kept pushing.

“Yesterday I didn’t relax physically, but I did slightly mentally and Kiyo came by and I didn’t want that to happen again so kept the gas on! I’m really happy with the win and now we can look at what we can do at Cadwell Park.”