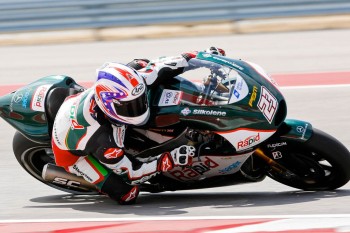 Bird has spoken of his ambition to extend his current PBM line-up of Kawasaki-mounted Shane Byrne and Stuart Eastonwith with an additional team in Britain next season, with speculation linking such a move to Ducati machinery.

The news comes as Bird announced his team will leave MotoGP at the end of 2014, casting Parkes’ world championship career back intro doubt after what has been a largely positive foray into motorcycling’s premier class.

“I am really excited about BSB because it will definitely be working with two different brands,” Bird told British MCN. “It looks like I can run with another manufacturer and have two teams on different bikes operating as two separate identities – I’d like to keep Michael and Broc.

“My racing future is back home in BSB and that’s what I enjoy and where my sponsors want to be. We are a British team and that’s where we’ll go back.”

Bird’s Rapid Solicitors Kawasaki team currently lead the standings with Byrne, whilst Stuart Easton is just 17 points adrift of the top six with four races remaining before the Showdown.