Anticipation rising at YRT ahead of 2015 YZF-R1 arrival

Kevin Curtain to carry out initial development on all-new model? 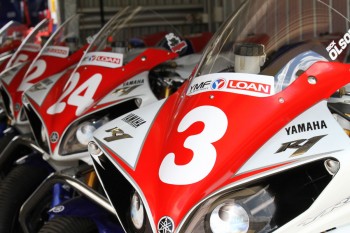 Yamaha Racing Team (YRT) with YMI is ramping up its preparations for next season as the unveil of Yamaha’s highly-anticipated 2015 model YZF-R1 draws closer.

It’s no secret that an all-new 2015 Yamaha YZF-R1 will be released for next year after a number of spy photos have surfaced in recent months, which will come as a welcome addition for Yamaha Motor Australia’s official factory team.

An expanded testing schedule is to be carried out by YRT upon delivery of the updated 2015 R1, with preliminary plans to roll out the model locally prior to Christmas and the new year.

“From what we understand, the bike will be released at one of the big international motorcycle shows and the information will be confirmed,” YRT team manager John Redding told CycleOnline.com.au. “I’m definitely keen to find out more than I know. We’re hoping to grab one of the first bikes on arrival and get to work.

“What would be the [testing] controlling factor is the availability of parts – we’re not that keen to go testing on it with nothing fitted, for obvious reasons. At the moment we’re trying to put everything together, so when we do go testing we can gather valid feedback on a spec that will be closer to a race spec.

“That problem is always compounded when the more different the bike is, the harder it is to get a hold of the materials required to build it. We’ve got feelers out there all around the world with various suppliers to see what we can find out. We’re not leaving any stone unturned and I’m hoping we will have the opportunity for at least one test pre-Christmas.”

And in a bid to fast-track the development process, Redding has revealed that retired multiple-time Australian champion and former World Supersport runner-up Kevin Curtain is in the frame to carry out much of the initial development tests. The team is yet to sign any riders for 2015.

Curtain was due to compete alongside current YRT with YMI riders Cru Halliday, Robbie Bugden and Rick Olson in 2014, but made a shock sudden retirement announcement following Wakefield Park’s opening round in March.

“We have been talking to Kevin Curtain about perhaps doing some testing with us, because [crew chief] Kev Marshall very much still values his ability in that area,” Redding added. “If the bike changes as much as the hype says it’s going to be, we’re going to need as much input as possible from experienced people.”