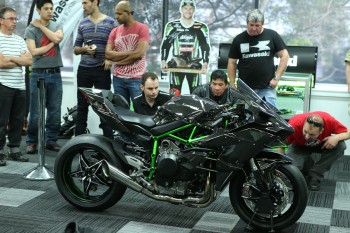 Kawasaki Motors Australia opened it’s doors to Kawasaki Team Green Australia (KTGA) members on Saturday, 11 October, with more than 100 enthusiasts turning up to the head office in Sydney to see the amazing new Ninja H2R in the flesh.

Recently unveiled at the Intermot show in Cologne, the Ninja H2R has taken the motorcycle world by storm. KTGA members were invited to KMA HQ in Sydney to be the first people from the general public to see the new motorcycle in Australia.

KTGA members were able to view the Ninja H2R alongside Warren Willing’s famous 1972 Kawasaki 750 Mach IV, Model H2 race bike which was rolled into KMA fresh from a total restoration.

Attendees were also able to see the new 2015 Versys 1000 and Versys 650 models that Kawasaki also unveiled for the first time at Intermot.

A few lucky KTGA members were given the opportunity to fire the Ninja H2R into life and listen as the full custom race exhaust reverberated throughout the building.