Marc Marquez won his fourth world championship on Sunday, a just reward for a season that he started brilliantly and in which he clinched the title with three rounds remaining. The Repsol Honda team rider successfully defended his title in MotoGP at the first available opportunity last weekend in Motegi. Despite mistakes at the last two races, Marquez left his rivals with no chance of catching him and could celebrate in style with races in Australia, Malaysia and Valencia in hand. 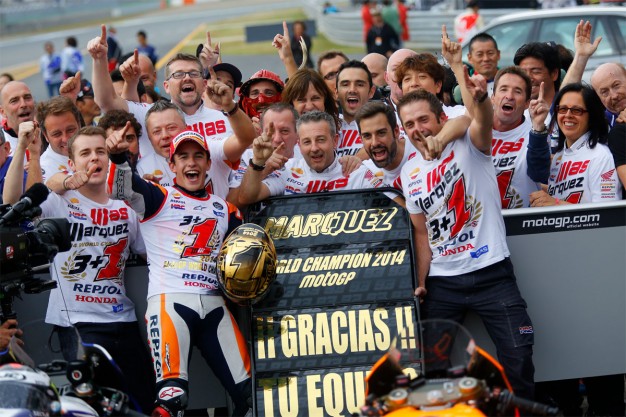 Is winning a world championship more difficult than taking 10 wins in a row?

The truth is that the mistakes over these last few races have made me appreciate more having won the world championship, because the first part of the season was very good, but it seemed as if the title didn’t want to come. I made some mistakes, perhaps caused by an excess of confidence knowing that I had a significant advantage. Those early victories allowed me the luxury of taking risks a little more than usual. But I was very clear that I wanted to win the title here, at the home of Honda, and that is also very nice.

You’ve won four world championships in five years. Do you get the impression that your life is going really fast?

I think I don’t realise it. Most importantly I’m enjoying the moment right now, because you never know what will happen tomorrow. We have won the title and we have to celebrate this, as we do with every victory. It’s very nice to share this joy with the team.

What stands out about each of the titles you have won in your career?

Obviously each title is special – each one has its moments. The 125cc title was the first and this is always very exciting. Also it was more difficult because I had to win it at the last race. The Moto2 title was satisfying and also had that bit of anger with it, after what had happened the previous year – five-months out injured. The first year in MotoGP was a big surprise. And this latest title is to thank Honda, who let me bring all my people – my team – back together and made for a great atmosphere in the garage.

What have you improved from last year?

You try to improve in all aspects, but it is true that I have adapted much better to the bike-rider package. We have developed a chassis more focused on our riding style and that has helped me to concentrate more on improving as a rider, and not so much on making the bike itself better. 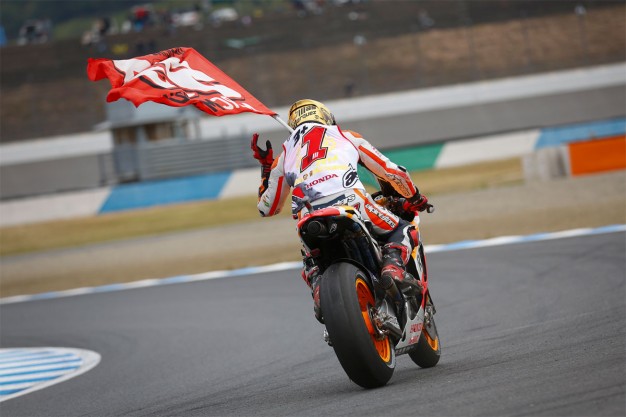 How will you face the remaining races of the season?

With the mindset of enjoying myself. I know there is a runner-up spot at stake and the other riders will be giving their all, but I will focus on doing my best and enjoying every race.

How are you going to find the motivation to retain the title next season?

You find motivation everywhere, especially after doing well one year. You try to keep the same form and progress and the team also push you.

Will your brother Alex win the world championship in Moto3?

That is the intention! I will help him and give him all the encouragement possible. Above all we must take all the pressure we can off him, because leading the series means a lot of pressure. It will be important to make him calm, so that he can handle it well, but I know from experience that the season is very long and in three races anything can happen.