This year marked a coming of age for 2014 Moto2 World Champion.

At the age of 25, Tito Rabat has seen his years of hard work and steady improvement pay off as he took a big step forward in 2014 to become a world champion.

On Sunday the rider from Barcelona clinched his first world title, following up on the success story of his former teammate last year in the Moto2 class Pol Espargaro. Rabat’s journey to the world championship glory in the intermediate class has been one of diligent self-improvement since his first appearance in grand prix racing in 2005.

Rabat made his debut in Valencia at the end of that 2005 season having been runner up in the Spanish 125cc championship that year.

The following season he made further guest appearances at Jerez and Barcelona-Catalunya before getting handed an opportunity in the second half of the 2006 campaign to ride permanently on Honda machinery. He attended 10 grands prix that year and registered his first points.

In 2007 he became a fulltime Repsol Honda 125cc rider and scored his first podium in China in third place. A tall, lean figure, Tito rode alongside Bradley Smith as he built up his race craft and world championship experience, missing two races due to a fractured left hand. 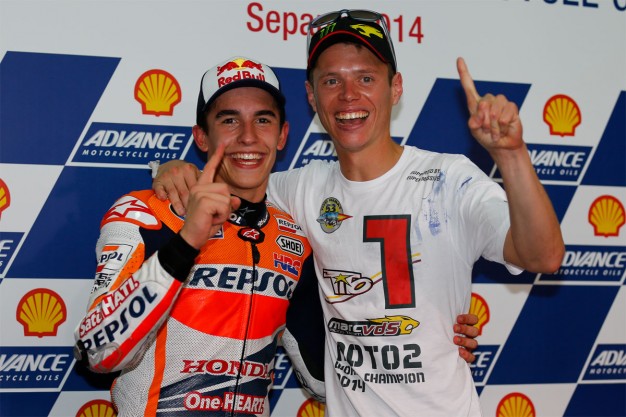 In 2008, Rabat rode a KTM, lining up in the same team as a 15-year-old called Marc Marquez. Rabat and Marquez would become good friends, but would they have dared to dream that they would both become world champions in the future?

In fact Rabat’s 2008 campaign was marked by the serious accident he suffered at the Grand Prix of Catalunya. Rabat hit his head, lost consciousness and remained in an induced coma for a few hours. But he soon returned to the race track.

In 2009 he moved to the Blusens Aprilia team still in 125cc and the following season of 2010, Rabat made a step forward as he scored two podium results and finished the season sixth in the standings.

That progress saw him recruited for a move up to the intermediate class and in 2011 he became a Blusens-STX Moto2 rider, finishing the year 10th overall – a decent placing in his rookie season in the category.

His best result of the season was third place at Indianapolis, as he stepped onto the podium with his friend Marquez and their fellow Spaniard Pol Espargaro.

For the 2012 world championship Rabat joined the respected Pons 40 HP Tuenti team to ride the Kalex and he would improve to seventh overall in the standings by the end of the year – though with only one podium to his name once more, this time in Japan.

Meanwhile, his teammate Pol Espargaro was fighting for the title with Marquez as the latter eventually took the Moto2 crown before moving up to MotoGP.

Last season it was Espargaro who triumphed in the intermediate category before his own move up to the premier class, whilst Rabat also took a significant step forward riding again on the Pons 40 HP Tuenti Kalex.

A more competitive Rabat would emerge, demonstrating his ability with three race wins and seven podiums en route to third in the championship behind Espargaro and Redding.

Before the end of the season he had announced his decision to move to the Marc VDS Racing Team in place of Redding. That move paid off in style for Rabat this year as he hit the ground running, with two wins in the opening three rounds. He would convert that to four victories in the first seven races, with two further podiums added into the mix. 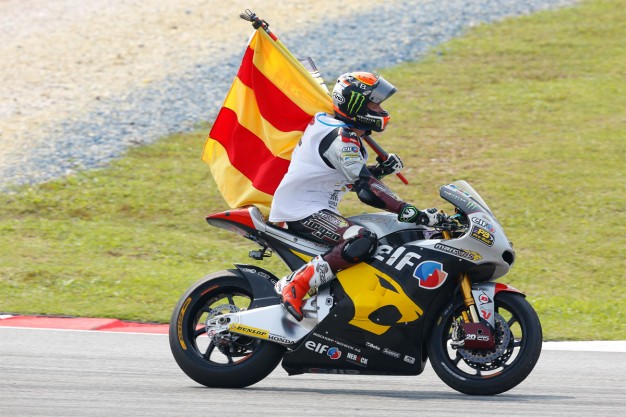 His main rival this season has been his teammate Mika Kallio, but another strong surge in form in the second half of the season brought Rabat three successive wins at Brno, Silverstone and Misano as he pulled away from his Finnish colleague at the head of the standings.

With the 2014 Moto2 world title wrapped up in Malaysia with a third place result, his 13th podium of the season, Rabat is world champion with a race to spare before the end of the season. He will receive a hero’s welcome at the final round in Valencia. All those hours of training and years of racing have been well worth it.

Rabat has been a deserving champion this season with 10 pole positions and seven race wins to his name in a dominant campaign. Rabat will defend his title with the same team in the same class next year and if he does so he will become the first back-to-back Moto2 World Champion, since the renaming and restructuring of the category in 2010.

He has already started from pole 10 times in 2014 – a new record for most poles in a single season in the Moto2 class. He is the first rider ever in the Moto2 class to lead championship standings throughout the season.

The only race in 2014 that Rabat has not finished in the top four is the wet race at Assen, when he was eighth.