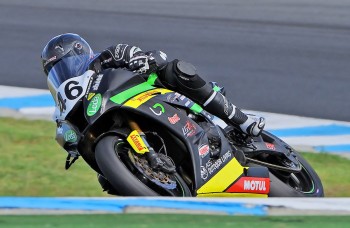 Mike Jones will be looking to make an impressionable start to the 2015 Swann Insurance Australasian Superbike Championship following his outright podium at the World Superbike event at Phillip Island in the Australian Superbike support category, his first event as part of the Australian Outdoor Living –Cube Racing Team.

Following his first season in Australia’s premier road racing category, Superbike, Mike is looking to take the next step forward as he chases his maiden victory in the nation’s most competitive series against a large fleet of factory supported opposition and Jones believes the momentum gained at Phillip Island in February will be critical.

“I’m excited for the first ASC round at Sydney Motorsport Park this weekend with the Australian Outdoor Living – Cube Racing Team. We had a good first outing together at Phillip Island alongside
the World Superbikes last month and I think we’ll continue to build momentum this weekend,” Jones said.

An incident in testing prior to the World Superbike event saw Mike suffer a broken wrist, though he believes it will not impair his performance significantly, it has forced him away from any testing pre-event at Sydney Motorsport Park.

“Unfortunately, I haven’t done any testing on the bike leading up to this weekend as I’ve been nursing my broken wrist that I sustained in testing at Phillip Island earlier in February. It’s still not one hundred percent, but I’m confident that it won’t be much of a hindrance on race day,” Jones added.

Despite not having had the opportunity to conduct on-track testing, Mike has been focussed on preparation of his Australian Outdoor Living – Cube Racing Team Kawasaki ZX10 Superbike’s with
critical suspension setups and overall performance to ensure he can be best prepared for an experienced opposition.

Mike will have four practice sessions and one qualifying session on Friday followed by two (2) 15 lap races on Saturday and Sunday.

Round one of the Swann Insurance Australasian Superbike Championship takes place at Sydney Motorsport Park from 27-29 March.