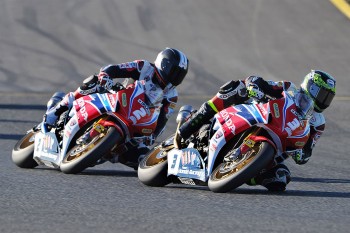 The Round 3 battle of the Superbikes at Sydney Motorsport Park has drawn to a close with #3 Troy Herfoss still holding the top position in the Australasian Superbike Championship.

The racing was fast and tight in Sydney this weekend and with 5 or 6 bikes battling at the front at any given moment it was bound to thrill.

Race 1 of the Swann Series today saw Herfoss get off the start line well from his P3 grid position. Likewise teammate #2 Jamie Stauffer who had to start from P8 after yesterday’s 15 second jumpstart penalty cost him his race win and grid positions heading into today’s racing. The pace of the Honda CBR1000RR SPs was strong, but Stauffer quickly became caught in a bunch of riders and seemed unable to navigate his way to the front, settling for a 6th place finish. Stauffer’s race pace was strong even so; his fastest lap of Race 1 a 1:31.417 seconds.

Herfoss battled well at the front of the field in Race 1 today and in the final few laps was in a fierce battle for the win. Taking 2nd by just .078 sec, Herfoss was pipped at the post, but with his fastest lap time a 1:31.293 sec there was no denying his competitiveness.

Race 2 for Superbikes was equally as tight, but Herfoss got a terrific start and lead the field on the first lap. There was much dicing at the front of the field and although Herfoss fought hard he had to settle for 4th place. His fastest lap time of the race was a 1:31.185 sec, less than a tenth of a second off the fastest lap of the race outright. Stauffer again was unable to penetrate the bunch from his P8 grid position and with a fastest lap time of 1:31.433 sec, he finished Race 2 in 6th place, taking 6th overall for Round 3.

An experienced campaigner, Stauffer is already thinking about the plan of attack for Round 4. “It was a hard day at the office today! I won a race yesterday, but got a jumpstart penalty that meant I didn’t qualify well for today and I struggled to get a clear run and struggled to pass in the races. The team worked hard to give me a great bike, but unfortunately we couldn’t get the job done today. I’m looking forward to getting to the next event and giving it our best to get back in the points.”

Herfoss finished Round 3 in 2nd place overall and holds tight to his championship lead heading into Round 4 at Queensland Raceway. “I’m glad to finish the weekend with a few more points over my nearest rivals. It would have been great to give the Honda guys a win after all their hard work, but today I did the best I possibly could in both races. I’m proud of how well the team is going and we are getting the best out of the bike. Hopefully Jamie and I can be strong at Queensland Raceway for the next round.”

Team Principal, Paul Free is also looking forward to Round 4, saying “The team did a solid job this weekend. The lap times were very strong, Jamie won Race 2 on Saturday and Troy finished on the podium in 3 of the 4 races of the weekend to finish 2nd overall today. Jamie has gained more championship points and Troy has increased his lead heading into the next event. The team worked really hard this weekend and we were extremely competitive. I can’t wait to see what we can do in Queensland in August.”