Allerton makes it three on the trot for YRT with YMI

Yamaha goes 1-2 in Queensland Raceway round. 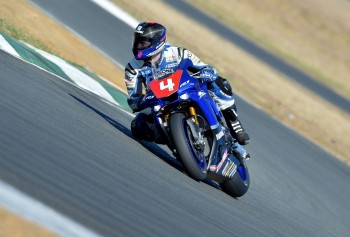 Glenn Allerton burst through for his first round win of the 2015 Australasian Superbike Championship and made it three round wins in a row for the Yamaha Racing Team in an action packed fourth round at Queensland Raceway over the weekend.

Allerton hit the QR circuit in top form right from the first lap of practice and charged his way to race wins during the FX Nationals on Saturday. With his confidence on the rise, Allerton was all set for a huge return to form when racing got underway on Sunday.

Allerton led a Yamaha freight train during the opening race of round four. Locked in a tight battle with teammate and previous round winner, Cru Halliday, the pair raced away from the rest of the pack as they went bar to bar for the 16 lap event. Allerton fought all the way to the finish to take victory, shadowed by Halliday. In third was Wayne Maxwell making it an all Yamaha podium for race one.

Race two got underway and it was shaping up to be carbon copy of race one with Allerton and Halliday in control and fighting over the lead. As the field completed 10 laps, Halliday fell heavily from his bike and lay motionless on the track forcing the race to be stopped. Thankfully, the concussed Halliday was ok and the race was restarted as Cru was taken away for observation.

Due to a rule technicality, the YRT riders of Allerton and Maxwell were forced to start in pit lane and had to fight their way forward once the race began. Together, the sliced their way through the pack to end up in fifth and sixth respectively. Allerton’s 1-5 results gave him the overall round victory, his first on the new R1 and since he joined Yamaha in 2015. Allerton now moves into third in the championship standings.

“No doubt it was a relief to finally ride the way I should and get the results both the team and myself expect. Race one Cru and I had a good battle going and I was able to slip by him when he went in too deep on turn three. The wind was really tricky today and made braking difficult and I think it got Cru out a bit then,” Allerton explains.

“Race two and we were at it again until he went down. It’s never nice to see a teammate end the day like that and I was really enjoying racing with him. “It would have been good to win both races but that’s the way it goes. For me, it just felt good to be back up front and back in the battle again. I think I have finally got my head around what works for me on the R1 so hopefully I can continue with the good form for the remainder of the year,” Allerton ends.

Teammate, Wayne Maxwell finished with 3-6 results to take second spot on the podium to make it a Yamaha 1-2 for the day. More importantly, he was able to claw back four more points on championship leader, Troy Herfoss, and close within three points of the championship lead.

“I just felt I was a bit off all weekend,” Maxwell starts. “We tested here a few weeks ago and my times were good but it doesn’t take much on this track to be a fraction off the pace. Still, we battled all weekend and finished up with a reasonable result and gained some points in the championship, so that was good.

“We still have a couple of rounds to go, so myself and the team will continue to work hard and finish the championship off strongly. “Best wishes go to Cru. I hope he feels better soon and it was a shame to see him go down as he was riding well.”

Halliday was concussed after his accident but at this stage he has no long term or major injuries and expects to line up for round five at Wakefield Park on September 25-27.

To follow the Yamaha Racing Team on social media; www.facebook.com/YamahaRacingTeam.