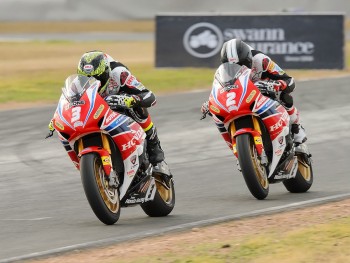 The 2015 Superbike racing season has now passed the halfway point after Round 4 of the ASC at Queensland Raceway over the weekend and Team Honda Racing is still in the lead.

The Hondas did just that with Stauffer finishing Race 1 on Saturday in 4th place, Herfoss in 6th followed by a terrific battle in Race 2 that saw Herfoss finish in 2nd place and Stauffer in 5th. Overall for Round 4 of the AFX-Superbike Championship, Herfoss took 3rd place on the podium allowing him to maintain his championship lead by 11 points.

Heading into Sunday’s Swann Insurance Superbike races, Herfoss shifted focus to the defence of his second championship lead. Herfoss finished Race 1 and Race 2 in 4th place, his fastest lap time a 1:09.224 sec and team mate Stauffer finished 5th in both races with a fastest lap time of 1:09.111 sec.

With 3 rounds remaining, Herfoss is pleased to hold on to the championship lead. “It was an interesting weekend for many reasons, but ultimately a success for Team Honda Racing. We improved our pace from last year, held onto the championship lead and showed our strength as a team. We can reset now and work on setting the pace for the remainder of the season.”

Stauffer gained valuable points in the championship over the weekend and is keen to bolster those points at the Wakefield Park circuit. “It was a tough weekend for us. The team worked really hard to get the bikes where we needed them to be, but it just didn’t come about for us. It was not for lack of trying from the team or myself. Still, we came away with more points and I feel confident we will be back at the front at Round 5 at Wakefield Park.”

Team Principal, Paul Free knew the weekend would be more challenging than others and is pleased with the overall result. “Realistically, overall it was a good weekend. Queensland Raceway is possibly one of the toughest circuits for us so to come away still in the lead is a really positive outcome. The riders did a terrific job and the bike performed well.

I don’t think we got the best out of the bike this weekend for whatever reason, but overall the team worked hard and our results will carry us to Round 5 still in the lead so I’m pleased with the event and I look forward to taking the CBR1000RR SP to Wakefield Park where I know we will be very competitive.”