Your chance to win a CBR1000RR at this year's grand prix. 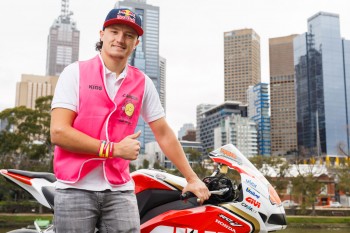 The Australian Grand Prix Corporation has announced Australia’s MotoGP rising star Jack Miller as the You Are My Sunshine (YAMS) charity ambassador for the 2015 Pramac Australian Motorcycle Grand Prix.

YAMS, a local Phillip Island not-for-profit organisation is continuing its ‘race to $1 million’ to raise funds for research in finding a cure for neuroblastoma disease, with this year marking the fourth consecutive year as the Official Charity partner of the event.

YAMS charity chairperson Jude Donahoo, who lost her beloved granddaughter Kahlila to neuroblastoma, said it is a major positive for her foundation to unveil Miller as an ambassador.

“We’re very excited to team up with the Australian Motorcycle Grand Prix for another year and to have Jack on board,” Donahoo said. “We are embarking on a race to raise $1 million to go towards research for neuroblastoma and the event plays a crucial role in helping us achieve this goal. We have currently raised $785,000 so we believe it’s a very achievable target.”

Miller, an active contributor to the cause, said he is stoked to be part of the YAMS team this year: “At the event last year I saw how much work the YAMS team were putting in for the fight against neuroblastoma so I was thrilled when asked to be their patron saint this year,” Miller said.

Australian Grand Prix Corporation CEO Andrew Westacott is delighted with the event’s dedication to the local community and the YAMS foundation.

“We’re thrilled to continue our support of YAMS and the work Jude and her team do. It’s a worthwhile local charity which helps make a difference to young children that are affected by neuroblastoma,” Westacott said.

Together with YAMS, the Australian Grand Prix Corporation encourage all race-goers to visit the GP Expo at the 2015 Pramac Australian Motorcycle Grand Prix and purchase a $5 ticket to win a Honda CBR1000RR and give hope to children suffering from neuroblastoma.