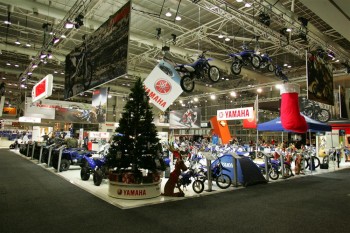 Momentum is building for the 2015 Sydney Motorcycle Show on 20-22 November at Sydney Showgrounds, with over 90 percent of the available floor space already snapped up by exhibitors.

For the first time in the history of the event, consumers attending the show on Friday, 20 November, will be invited to attend the new motorcycle launches, normally conducted exclusively for media.

Visitors will not only be privy to a first look at the new releases, they will also have the opportunity to hear detailed insights directly from each manufacturer.

Now in its 10th year, the bi-annual Sydney Motorcycle Show is growing exponentially and commands over 25,000sqm of the Sydney Showgrounds site.

“The 2015 Sydney Motorcycle Show will be the biggest motorcycling event Sydney has hosted,” said Bayliss. “Exhibitor interest has been incredible and for those still wanting to be involved, it is not too late so don’t delay on booking your site.

“Over 100 exhibitors are already confirmed for the main exhibition hall, while some of the bigger features of the 2015 event will dominate the outside precinct.

“We have introduced a number of new initiatives and I am particularly excited to be inviting show visitors to witness the new bike reveals.

“It is a unique opportunity and those who attend on Friday will be amongst the first in Australia and in some cases the world to see the covers come off some incredible machines,” Bayliss added.

A second exhibition hall has been confirmed which will house the ‘Custom Classic’ exhibition and some very special show features to be announced over the coming weeks.

Hall 2 will also host the largest ever sales area at the Sydney Motorcycle Show, with the majority of the big brand names offering massive price reductions.