Team Honda Racing’s Troy Herfoss edged a little bit closer to winning this year’s Australian FX-Superbike Championship and Swann Insurance Australasian Superbike Championship on the weekend. The local man from Goulburn scored an emphatic 2-1-1 in the AFX-SBK championship and a 1-3-1 result in the ASC, which now sees him enjoying a 16-point lead over Yamaha’s Wayne Maxwell in both series with just two remaining. CycleOnline.com.au caught up with the 28-year-old just moments after the final race on Sunday. 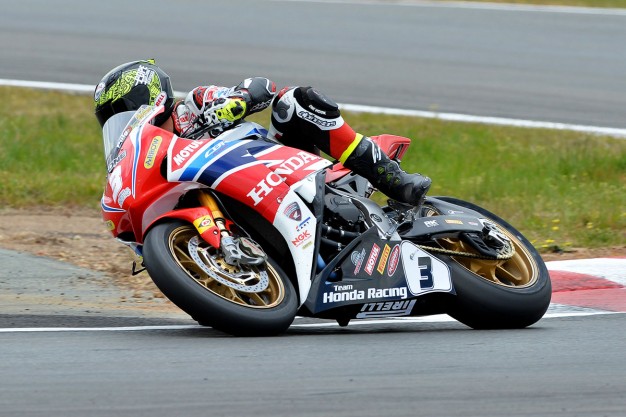 Wow, what a weekend Troy. Four out of six wins this weekend in your own backyard in front of all your friends, family and I dare say a lot of supporters out there, but more importantly you leave Wakefield Park with a 16-point lead over Wayne in both series. You must be wrapt.

I’m really, really happy about this weekend. Like I said in an interview before, my plan was to try and get through round four with the championship lead or close to a championship lead. Then we could have come here and to Winton, where we know we are strong at. After these two rounds we can head to Sydney Motorsport Park and know we are strong there and if things go our way, we know we can still win races there. Of course the final round could be a bit difficult than Wakefield or Winton. We have ticked one box, to be able to have won four out of six races and to fight for the win in the other two races and to set the fastest lap of the weekend in race one has been a great weekend. We have made no mistakes for the weekend; we kept the Honda CBR1000RR SP on two wheels in difficult conditions yesterday and gained valuable points on both days. I can’t thank my team enough for all the hard they have put in this weekend. It’s nice to repay them back with a round win.

The only slight little ‘hiccup’ you made was in race two on Saturday when you ran off the track after having an almighty dive up the inside of Glenn [Allerton] on the last lap into turn eight. Can you explain what happened then?

Well, in my eyes, third is the same as second. If I did stay behind Glenn I would have definitely finished second and that’s the same as finishing third if you ask me.

That’s very true. I remember you told me in an interview I did that if you didn’t win races at Wakefield Park, you would have been 100 percent to blame. Well, you have delivered this weekend.

It turned out that one of the races probably wasn’t my fault, in race one yesterday when I got pinged for passing under a yellow flag. Anyway, that’s debatable. But big respect to all the officials and everyone making the decisions, they all did a great job yesterday in difficult conditions. Look, after race one when I got a bit fired u,p it was just the heat of the moment. Technically it was difficult, however they ruled it the way that they did and I’m happy with that. Race two today, for sure that was my own fault. I tried to do my best to go with Glenn on a new tyre, I had an opportunity to win the race and I just wasn’t good enough in that race. I still managed to finish on the podium, which keeps my run of podiums in each round going, so I’m happy.

So what’s in store for tonight? Big party? You sure do have a lot of your mates here who look like they are ready!

Yeah I think we will have a bit of a party tonight and enjoy it. 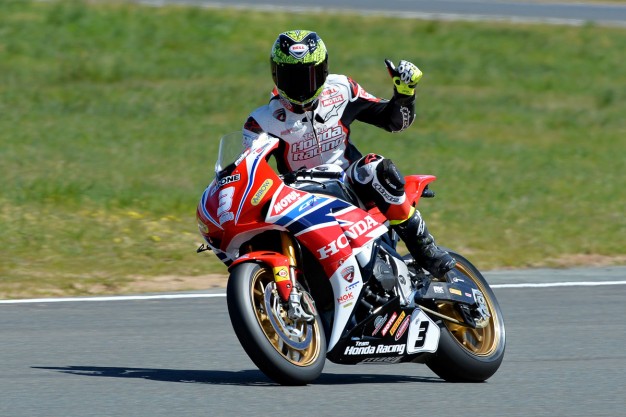 Fast forward a couple of weeks, we change the pace a little bit and head to Phillip Island for the Australian Motorcycle Grand Prix, where you lead the Phillip Island Superbike Championship, which runs in conjunction with the Australian round of the MotoGP. After today do you feel that you are riding the crest of the wave?

Yeah, well hopefully we can keep the wave rolling. I’m really enjoying racing so much; it’s pretty easy to see that. I’m in a great team, we all get along so well and the whole team work really hard for me and they can see that I’m working my hardest for them. It’s easy to be in a team when you know everyone is doing their best and putting in 110 percent in. No matter what track or bike we’re on, we’re making our Honda the best we can. So yeah, we are looking forward to a good month of racing in October with Phillip Island and Winton and then we head to Sydney Motorsport Park in December.

The next round of the Swann Series heads to Winton Motor Raceway as you just said. What’s your prospect there? As you said at previously, your bike should suit that track.

I think it will difficult, but I can’t see why we won’t have the same pace as what we have here. You can look at statistics and stuff like that and going off that, the pace that Wayne and I had last year here and Winton, they didn’t match that pace today on the Yamaha. You can’t go off that stuff. Technically speaking we should be competitive with them at Winton and maybe even a little bit stronger.

It’s shaping up to be a cracker of a round down south. Anything you would like to add from your point of view?

I just want to add that it has been a great weekend and I really appreciate Goulburn supporting the event. To have such a large crowd watching on just makes it so much better when you have crowd there supporting you and your sharing it with someone. I hope everyone has enjoyed the action today and they come back next year even stronger.

Well, thanks heaps for your time Troy. Roll on Winton at the end of October.