Elliott setting out to extend ASC series lead at Winton 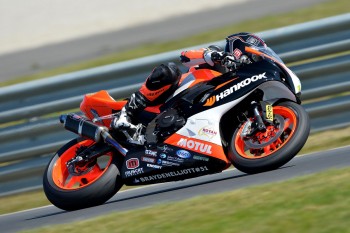 Tumut’s Brayden Elliott has diverted his attention to opening up a comfortable lead in the series points with a buffer of just six entering the event for the Australasian Supersport Championship (ASC) at this weekend’s penultimate round at Victoria’s Winton Motor Raceway with Elliott buoyant following his overall victory in Australian Supersport Championship at Phillip Island earlier this month.

With just two rounds remaining in the 2015 Australasian Superbike Championship at Winton Motor Raceway and Sydney Motorsport Park, Brayden is feeling confident that he can end his year on a high considering the extensive track time that he has spent at both venues. With a good bank of podiums throughout the season so far, Elliott is completely focussed on opening up a comfortable Championship lead this weekend entering the final round.

“This weekend’s sixth round of the Australasian Superbike Championship is one that I am highly looking forward too. To be finishing off the championship with two circuits I know well is a huge bonus as we enter the Winton round as the current Supersport Championship leader. I think myself and the team have done a good job all year with consistent results especially at circuits I didn’t know very well which haven’t always suited the bike,” Elliott said.

Seen as a primary testing track for Brayden, Winton Motor Raceway is a circuit that he and his team have both completed numerous laps around but also have extensive setup data for the varying conditions that are synonymous with the country circuit. Elliott also identifies the track as one that suits his Hankook Tyres Suzuki GSX-R 600 and he will be looking to make the most of this advantage over his opposition.

“Having taken part in previous testing at Winton Motor Raceway this is also one of the closest tracks to home and I am confident in my track knowledge and bike set up leading into the round. I see this round as a crucial time to gain strong results and continue to give it my absolute best efforts each time I am on track. I certainly need to take advantage of competing at Winton Raceway with the track layout definitely suiting the advantages of the Hankook Tyres Suzuki GSX-R 600 machinery,” Elliott added.

The first weekend in October was witness to Brayden claiming the Australian Supersport Championship at Phillip Island and on the back of this, he is looking to carry forward that momentum in order to maintain his regular front running position in the highly competitive Supersport field. Although there are still two events reaming, Brayden is also looking at the exciting prospect of achieving the Supersport double in just his second full year in road racing.

“I’m feeling quite confident entering this weekend on the back of some big results in recent events, in particular winning the Australian Supersport Championship earlier this month at Phillip Island. This weekend is important to bring home some big results as it is genuinely the business end of the season with only one round remaining after this, I’d love to be able to do the double and win both the Australian and Australasian Supersport Championship’s in the same year so I’ll be giving it my all every time I hit the track,” Elliott concluded.

Brayden will be on track for four practice sessions and qualifying on Friday with three 9 lap races each on Saturday and Sunday.

Round six of the 2015 Swann Insurance Australasian Superbike Championship that takes place at Winton Motor Raceway, Benalla, Victoria from 23-25 October.