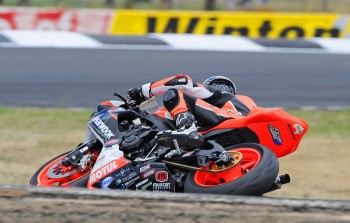 Brayden Elliott will enter the final round of the 2015 Swann Insurance Australasian Superbike Championship sitting in second overall, trailing by 11 points following an adjustment in the series standings entering the event according the series regulations. With the Supersport riders forgoing their worst round, it now slips Elliott to second after leading the points for the entire season so far.

After launching into the 2015 year in fine style by claiming his first of many podiums for the season at the first of three rounds at Sydney Motorsport Park, Brayden worked to open up a comfortable lead in the Championship in the first six events, however with his worst result being fourth overall during the year, he now sits second, 11 points behind and is more determined than ever to deliver a winning result for the Hankook Tyres Suzuki GSX-R 600 team and to claim his second National Supersport crown for the year.

“The change in championship lead was certainly disappointing, I’m sure its not a rule that a lot of riders agree with but that’s the way it is. Over the first six rounds I have finished on the overall podium five times with a worst finish of fourth although I have been well aware of the rule to drop a round.”

“Personally I think when we have a seven round championship then it should go on each round and be a seven round championship, with consistency playing a huge part, not being able to drop a round from a mistake or other issues. I feel we have been consistently fast all year, winning round one and maintaining the lead up until now shows the effort
put in from the whole team,” Elliott said.

With just over six weeks between the last round at Winton and next weekend’s outing in Sydney, it has allowed Brayden some time to focus on not only maintenance and preparation of his bikes, but also on his own personal fitness and welfare, whilst remaining focused on the task at hand on track, he remains fully aware of what’s required in the points to elevate himself back into the lead by the end of the weekend.

“I have kept a close eye on the points all year so I was well aware of the situation. I am now eleven points behind with a possible 75 to be gained, the championship is far from over. When I worked out the change in points I have felt a little less pressure, going into each round with the lead was great but along with it comes an added amount of pressure to maintain that lead.”

“Over the past month we have been able to work heavily on bike maintenance finally getting a few weeks to regroup in the workshop. My fitness training has been great and I’m confident this will help over a long two days racing in summer heat. Mentally and psychologically I feel the best I have done all year, I feel I have a lot to gain and can guarantee my absolute best efforts.

I’m sure the championship will go down to the wire and I thank my family and team for the continuous support and extra effort put into the final round,” Elliott concluded.

Brayden’s final event of the season is round seven, the final round of the 2015 Swann Insurance Australasian Superbike Championship takes place at Sydney Motorsport Park, Eastern Creek, NSW from 4-5 December with a twilight format on both days.